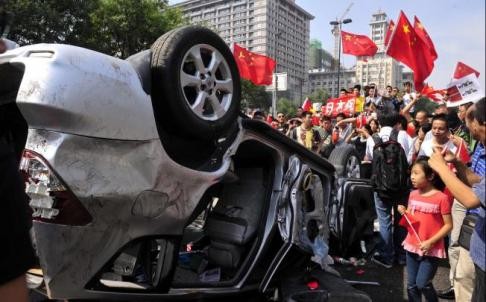 Three months after a territorial dispute led rioters to vandalize Japanese cars in China, carmakers from Toyota Motor Corp to Nissan Motor are luring back buyers with discounts and guarantees. But dealers like William Chen may need more persuasion to invest in the brands.

“Sales of Japanese brands plunged about a third at my outlets,” said Chen, whose family owns about 30 showrooms selling Nissan and nine other brands in the eastern city of Taizhou. “I would prefer safer brands over Japanese ones in the future.”

More distributors than ever are considering quitting Japanese car brands, even as showroom traffic and orders begin to rebound, according to the China Automobile Dealers Association.

Failing to sign up enough new dealers will hurt Japanese carmakers, benefiting General Motors, Volkswagen and Hyundai Motor as they compete to expand in smaller Chinese cities where the bulk of future demand lies.

“If dealers had to choose between, say Toyota and Volkswagen, why would they choose a Japanese brand if they have to deal with this every two or three years?”

About 1,800 Toyota, Nissan and Honda-branded cars were damaged during anti-Japanese protests in September, according to Guangzhou Automobile Group, which operates joint ventures with Toyota and Honda Motor.

Nationwide demonstrations erupted in China in September after Japan’s government nationalised a group of uninhabited islands that China also claims.

A Toyota and a Honda dealership were set on fire in the eastern port city of Qingdao in September during the protests. The owner, Wang Chongwei, suffered losses of as much as 80 million yuan (HK$99 million), Netease.com reported in October.

Wang did not answer calls and text messages to his mobile phone. An employee who answered the phone at the Toyota dealership said they are focusing on fixing cars for customers.

Though Wang’s case is an extreme one, other dealers selling Japanese brand cars throughout the country have also been struggling with declining sales.

The ensuing consumer backlash sent sales of Japanese car brands plunging 59 per cent in October, dragging their collective market share to a record low of 7.6 per cent, from 19 per cent in the first eight months of the year before the dispute escalated.

“Investors look to maximise their profits and if sales tank, they will have to switch to other brands,” said Liu Qingjun, general manager of Goldenport Holdings, which builds and operates multi-showroom sites.

A Toyota dealership at its Beijing compound stopped selling cars last month after the islands dispute and the owner is now looking to sign up with non-Japanese brands, Liu said.

“I have never seen so many dealers desert the Japanese brands,” said Luo Lei, deputy secretary general of the state-backed car dealers association. “The psychological impact on buyers and dealers is unparalleled. Automakers have to figure out a way to address it, otherwise it will do long-term harm.”

A small number of Honda dealerships have stopped operations “out of their own considerations”, said Zhu Linjie, Beijing spokesman for the company.

GAC Toyota Motor, a Toyota joint venture, has pledged to waive punitive measures imposed on dealerships for failing to meet sales targets. Carmakers typically give bonuses or levy fines on dealers depending on whether they meet annual sales targets.

“If dealers are worried about their survival, we will take measures to help them become more confident about their future income,” said Feng Xingya, executive vice-president of GAC Toyota, at the Guangzhou car show last month.

Feng said a dealer in Beijing had stopped taking cars from GAC Toyota. The company is sticking to its target of increasing its outlets in China to 600 by 2015 from the current 350, he said.