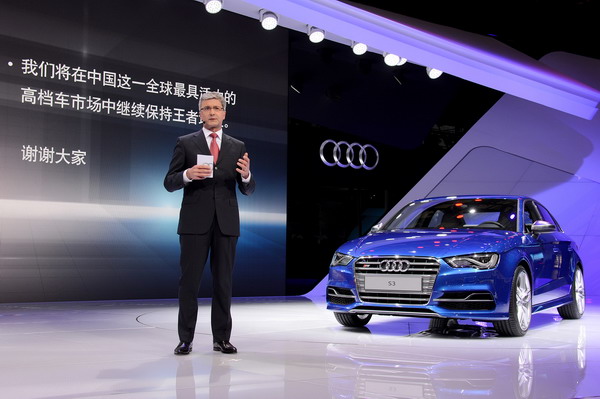 Audi plans to boost annual sales in China, its biggest single market in the world, to 700,000 units by 2020, Chairman and CEO Rupert Stadler revealed at the ongoing Shanghai auto show.

It is a goal that many analysts view as conservative for a brand that moved more than 400,000 cars last year.However, the target is rational given the slowdown in the nation’s premium car market in the first quarter of this year.

“In the first quarter, the premium segment in China grew slowly. It depended on our competitors, who lost a lot of volume. We had good growth,” Stadler said in an interview.

Audi’s China sales rose by 14.2 percent to nearly 103,000 cars in the first quarter, maintaining the brand’s status as the top premium car manufacturer in the nation.

BMW sold more than 80,000 cars in China during that period, a slower increase of 7.4 percent compared to the previous year. By contrast, Mercedes-Benz sales in China tumbled by 11.5 percent to 45,440 units.

Stadler predicted that the premium segment in China will slow down in the near future relative to the explosive growth seen over the past few years.

“We cannot always expect to have 30 percent, 40 percent or 50 percent growth. I think it’s very normal that the China market is moving now a little bit toward normality. I would say 10 percent or 15 percent is still a lot compared to other markets in the world. We are pushing strongly,” he added.

Audi became the first premium global brand to produce cars in China when it opened its first facility in 1988. It runs a joint venture with parent Volkswagen Group and China’s FAW Group.

Audi now has two plants in the northeastern city of Changchun with a combined production capacity of 400,000 units a year. They make the Audi A6 and A4 sedans as well as the Q5 and Q3 SUVs.

It has a new plant in Foshan, Guangdong province, with an annual capacity of 150,000 cars. The factory will begin producing the all-new Audi A3 sedan at the end of this year.

Stadler is confident of the potential of China’s premium car market in the long term because the rate of car ownership in China remains much lower than in the West.

The number of cars per 1,000 people here in China is 80 to 100, whereas in Germany, the figure is more than five times that, Stadler said.

“So there is big potential, and we would seek to harness that potential but in a prudent way,” he said.

He said there should be a strong emphasis on qualitative growth.

“It doesn’t help you if you invest in overcapacity that you cannot fully utilize afterward, and the result would be that you have to give discount after discount,” Stadler said.

A number of other Audi models, including the new R8 Coupe, the RS 5 Cabriolet, the RS 7 Sportback, the SQ5 and the A6 hybrid, are making their Asian debuts.

The A6 hybrid and the A8L hybrid limousine will hit the Chinese market before the end of this year, according to the company.

When asked whether he is concerned about the Audi A6 being replaced by FAW’s independently owned Redflag H7 sedan for high-level government official fleets, Stadler said: “We have to see that the market has developed absolutely in a very modern way in the past five to 10 yearsSo the governmental business now is already reduced, and we are selling cars to private customers, to companies and to whomever.”

Almost all fleet vehicles for high-level government officials are currently Audi A6 sedans, but China plans to substitute the Redflag H7 for Audi A6 in new procurements in the future.

“With a growing market, with customer segmentation and with the brand positioning of Audi, we don’t depend only on the Audi A6. We have the A4, the Q5, the Q3, and the A3,” he said.

Stadler said Audi will further increase its product portfolio in China in the coming years to include environmentally friendly products and technologies for sustainable mobility.

The company will bring the A3 e-tron, its first plug-in hybrid model, to China, he said, though he did not give a specific date.

The A3 e-tron made its global debut last month in Geneva.

Audi and its joint venture have two models making their world debut at the auto show – the new A3 sedan and the sport version of the S3.