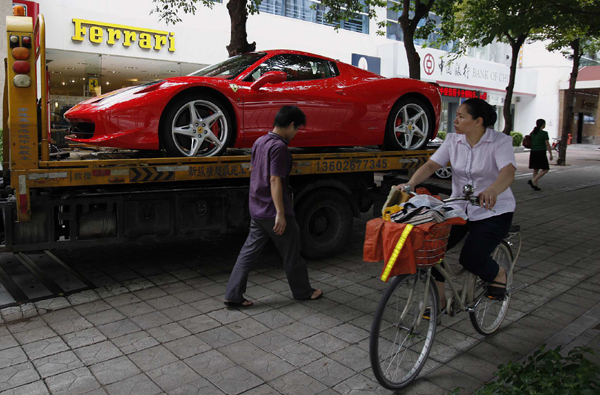 Ferrari unveiled a five-year business strategy on Wednesday in which it hopes to increase its turnover from China and the United States, as income from Europe remains sluggish. “The Greater China market plus the Far East region will contribute 2 percent more turnover to Ferrari in the next five years, while the US will generate 10 percent more,” said Luca di Montezemolo, its chairman.

The company saw a 5 percent fall in sales in its home market, Italy, last year.

“So we cannot ignore the robust economic potential in China, which will help drive Ferrari’s business in the future,” said Montezemolo.

In 2012, Ferrari sold 7,318 sports cars worldwide, a 4.5 percent increase from 2011. It sold 784 cars in its Greater China market, a 4 percent rise, reinforcing the market as its second largest after the US.

“I’m satisfied with our market performance in China. In the coming years we will put more effort into China, the world’s largest vehicle market, including training customers into making the Prancing Horse more favored by growing new rich,” said Montezemolo.

Ferrari has 27 dealerships in the Greater China region, he said, and the company plans to have 30 dealers by the end of 2013, with three being added on the mainland.

However, Montezemolo said the company’s sales this year are likely to be similar to those in 2012, both globally and in China, where the premium-car market has slowed along with the overall car market.

Moreover, Montezemolo said that Ferrari will invest 250 million euros ($329 million) in emission reduction technology over the next five years, half of the company’s budget on research and development.

The move is in line with Chinese government’s requirement on energy conservation and emission reduction for the automobile industry.

Matthias Mueller, chairman of German luxury vehicle and sports carmaker Porsche AG, also said recently that its sales are likely to be flat this year, after rising 28 percent year-on-year in 2012.

Andrew Thomson, head of automotive, Asia Pacific & China, at KPMG, said: “The new government’s commitment to addressing corruption and increasing transparency in respect of, for example, government agency and SOE spending, may lead to some challenges for the ultra-premium vehicle segment in China this year.

“The feedback we are receiving from clients and the market are telling us that ostentatious displays of wealth will become less prevalent.”

“People may be less likely to want to draw attention to themselves by buying ultra-premium vehicles, and the relevant automakers may need to adjust their development plans accordingly.”