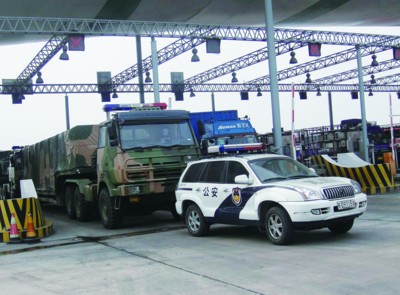 Tollways are expensive in China, with drivers having to pay up to 100 yuan per 500 kilometer, which is enough to destroy margins for many a small transport company. Vehicles belonging to the Chinese army however, don’t need to pay a cent. A truck driver from the great city of Chunzhou in Anhui Province this came with a novel solution.

He painted his truck in army style, fitted fake military license plates and hit the road. But things didn’t work out too well. A tollway attendant somehow didn’t trust the driver to be an army man and called the police.

Asked about his truck the driver said he was on a secret mission transporting missiles, and that local police had to stay out of it. The police then called the Chuzhou City Military Garrison Command, who denied any such transport was going on. Police promptly arrested the driver who faces a long time in jail. Fooling with the army is considered a very grave offense in China…