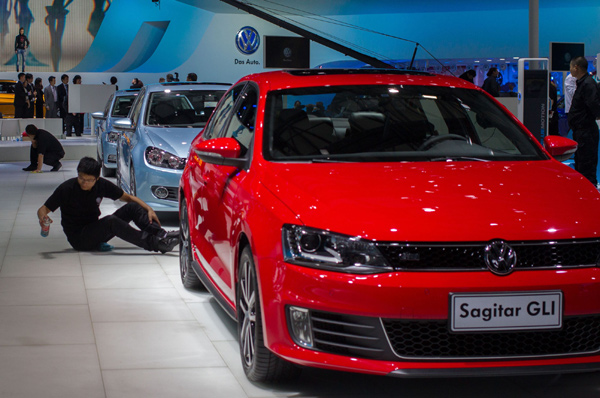 German automobile conglomerate Volkswagen AG will invest 12 billion yuan ($1.95 billion) to build its first plant in Central China, in a bid to help increase its capacity to meet the rising demand from the world’s largest vehicle market and respond to the similar move its major rival General Motors announced last month.

The new plant will be set up by Volkswagen’s joint venture with China’s SAIC Motor, and will have an annual output of 300,000 units, German national daily newspaper Frankfurter Allgemeine Zeitung reported.

It also said that the production at the new plant, located in Changsha, capital of Hunan province, will begin in early 2016.

An official with Volkswagen Group China told China Daily on Tuesday that the plant agreement will be signed on Wednesday in Changsha and the construction of the plant will start on Thursday.

Details about the plant will be released after the signing ceremony.

According to an environment assessment announcement posted on the website of the Hunan Research Academy of Environmental Sciences in October, investment in the plant will reach 12.08 billion yuan, and the facility will produce Skoda Octavia and two other medium-sized sedan models.

Martin Winterkorn, chairman of the board of management of Volkswagen AG, said in March that Volkswagen will add 10 new plants around the world, with seven in China, in the near future.

He confirmed that Volkswagen’s newly built plants in Urumqi (the Xinjiang Uygur autonomous region), Foshan (Guangdong province) and Ningbo (Zhejiang province) will start production this year. The company will also build parts plants in Changchun in Jilin province and Foshan in 2013.

Over the next three years, the German automaker plans to set up a new vehicle factory in southwestern China.

The plan is aimed to support Winterkorn’s target of increasing Volkswagen’s output capacity in China from current 2.6 million to 4 million by 2018, with average annual growth of 35 percent.

Bob Socia, president of General Motors China, said on April 20 that the US automaker will open four additional plants in China through 2015, after it opened two new manufacturing facilities in 2012.

“General Motors’ manufacturing facilities in China are running at near maximum capacity. We need to add capacity to keep up with the rising demand for its products,” said Socia.

The planned plants will enable General Motors, the largest foreign vehicle producer in China by sales, to increase its domestic manufacturing capacity by 30 percent annually to about 5 million units by 2015. It will also create around 6,000 manufacturing jobs.

It found that 70 percent of respondents view China as their top choice for investments, ahead of other BRICS countries India, Russia and Brazil and South Africa. The BRICS markets are expected to account for nearly half of all global vehicle sales by 2018.