Visit to the Xin Longma minivan factory in China 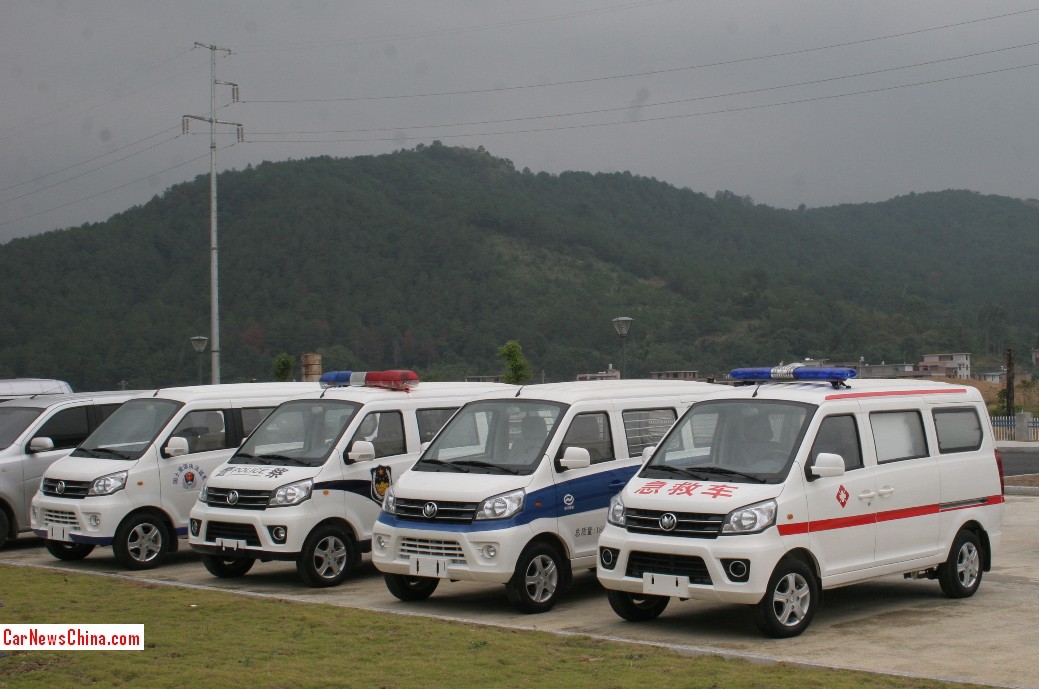 Longma minivans are well in production but have not yet appeared on the Chinese car market. What’s going on? Erik van Ingen Schenau of the China Motor Vehicle Documentation Centre decided to go to the city of Longyan to find out:

Longma is an important producer of agricultural vehicles in Fujian province. Small, slow, underpowered, cheap trucks. Over the years Longma has started to make normal trucks and truck conversions. The management of Longma has recently found out that small minivans and minitrucks are very popular in the Chinese country site.

A new sub-company has been created, NLM Motors (New Longma). This company is part of the Fujian Group, together with SouthEast (Dongnan and Mitsubishi cars), Fujian-Benz (vans) and King Long (buses). Fujian Group has actively supported NLM.

A new factory was set-up in the Fujian country site, in a valley between the mountains, south of the city of Longyan. In November 2012 the tools were installed. A brand new minivan was designed by Fujian Motors, in cooperation with Dongfeng. 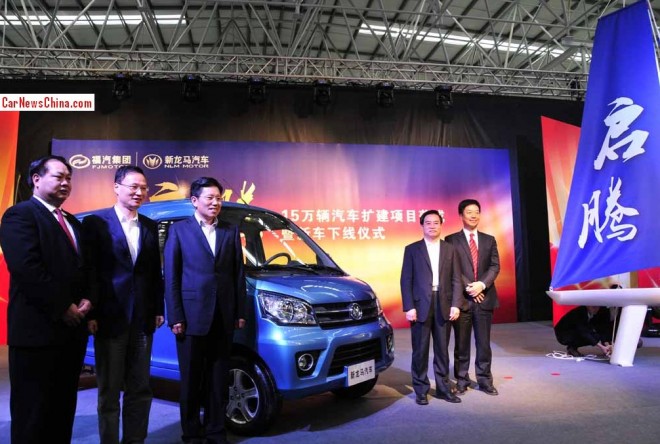 Production started and the first vehicles were ready to hit the market. But they didn’t. New Longma still had to receive the formal type approval by the State Development and Reform Commission (SDRC). Without such an approval an automaker cannot sell cars. New Longma expected to receive the approval without problems. However, the SDRC objected, saying China had too many minivan makers already.

Convinced that the problems would be solved soon, the factory management decided to continue production. An investment of 1 billion Chinese yuan (122 million euro) was made, 100 workers were on the job, support of the local and provincial government was strong, so what is the problem? 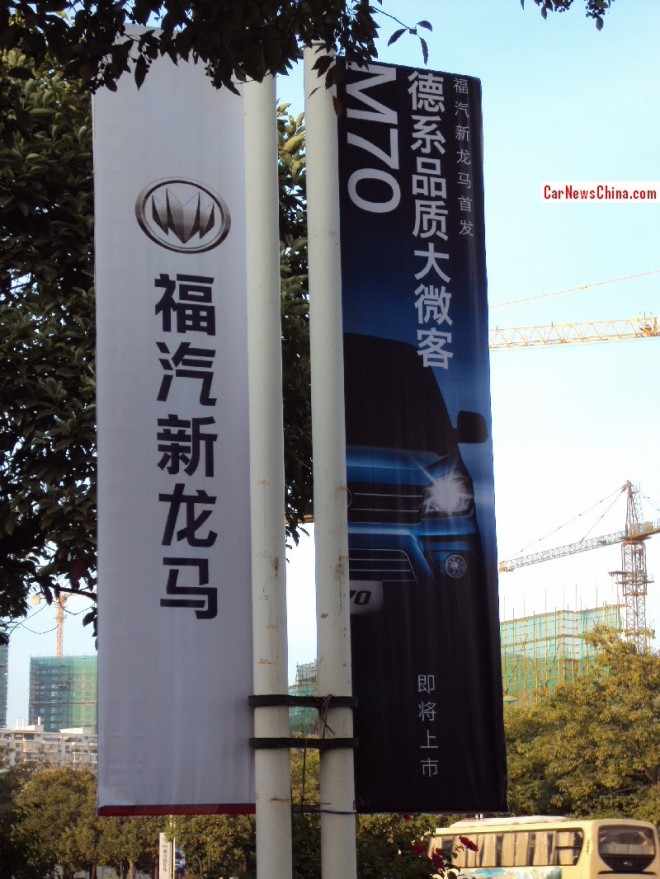 On arrival in Longyan I checked the streets for New Longma vehicles, but didn’t see any. There vehicles were advertised everywhere in town, but there was no place to buy one. Time to have a look at the source!

I took a taxi to the factory, about 25km south of Longyan city, in a new industrial district. Big new factory area. But no NLM’s around. I was received by very kind staff. And they explained: “We have a problem. We don’t get the type approval. We started production and we made already nearly 1000 cars. We developed a factory for 150.000 cars per year. And in phase II we can produce 300.000 vehicles. But we only made one thousand.” 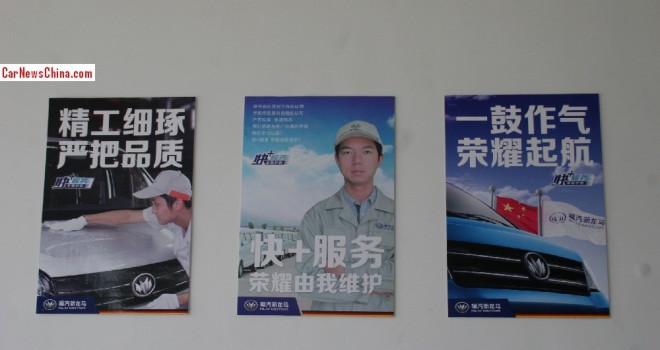 Posters inside the factory.

I asked where they sold these cars. They told me: “We are not allowed to let them leave the factory area. Only one car has a temporary license for test driving outside the factory. We stored all the produced cars in the factory halls.” During a tour I visited several halls. The cars stood stored on every available empty space between the machinery. I was not allowed to take pictures inside the factory, but later on staff allowed me to take a few pictures outside, where a dozen demo cars were parked in front of the factory.

“What about the future”, I asked. They didn’t know. I had a few suggestions: export the stock, or buy a bankrupt manufacturer with a license. Many Chinese manufacturers started business like that: Geely (Deyang), Lianhua (Yunque), BYD (Qinchuan), Gonow (Hanjiang), just some examples. My suggestions were well received, but so far nothing has happened yet. It seems we will have to wait a bit longer before the first New Longma minivan hits the market… 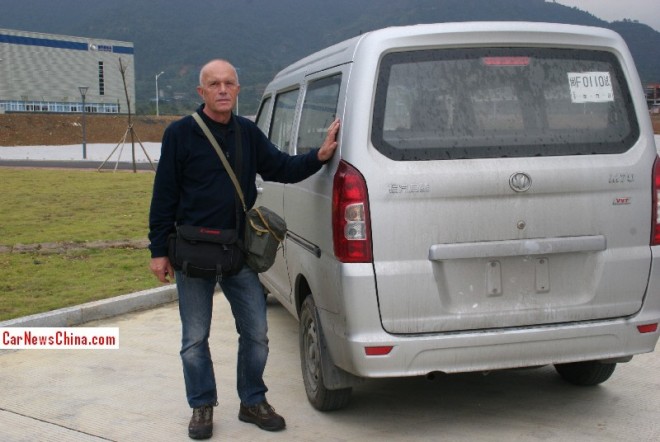 Star reporter Erik van Ingen Schenau with the lone test car that can drive outside the factory gates. 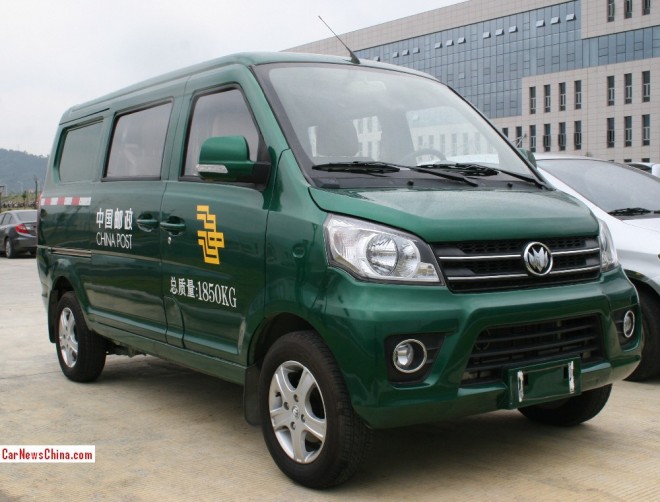