Tesla Model X Crashes Into A Tree In China, Penetrated By Guardrail 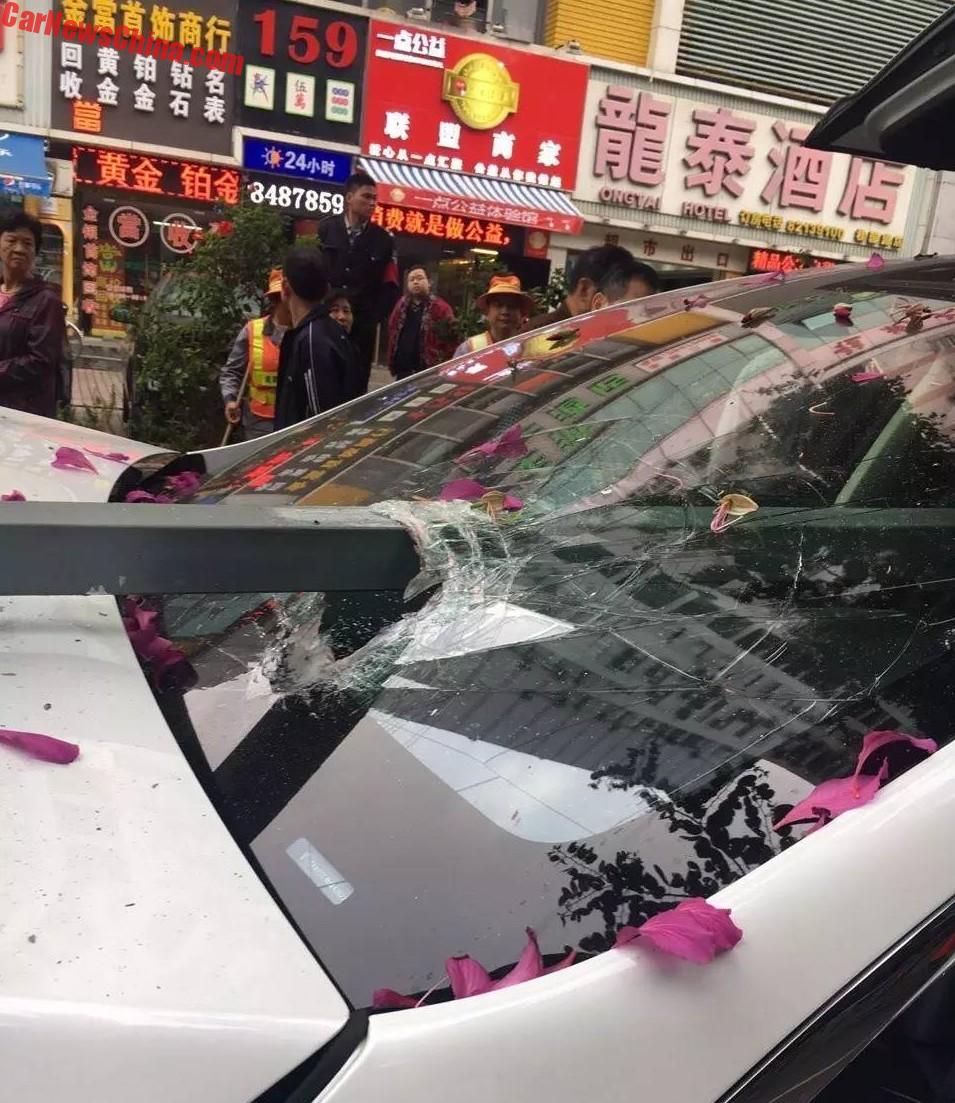 A very strange crash with a Tesla Model X in China. The accident happened a while ago, on January 29 in the great city of Shenzhen in Guangdong Province, but was recently brought to out attention after we wrote about the Model X transport drama. The Shenzhen accident saw a white X crashing into a tree with an iron guardrail penetrating trough the windshield. 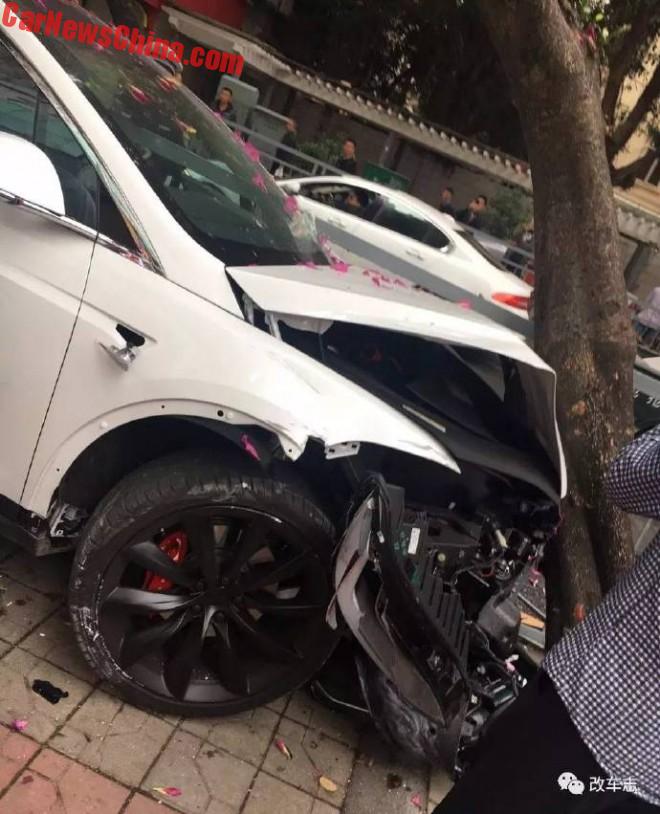 The exact cause of the crash is yet unclear. This is sure: the crash happened with an employee of a car wash service at the wheel. Nobody got hurt. And most odd: the owner of the Model X ran off. He went away! Didn’t wait for police or insurance agents. Off he went, and as far as we know he hasn’t been found yet. Why would he do that? Was is a stolen car? Or was it not insured? There are more questions: one of the falcon doors is open, indicating there were passengers in the vehicle at the time of the crash. Was the employee trying to show off to his fellow employees perhaps? And then there are conflicting stories about the auto-pilot. Some sources tell us the driver had engaged the auto-pilot, another source says he engaged it by accident, and yet other sources including most media don’t mention the auto-pilot at all. 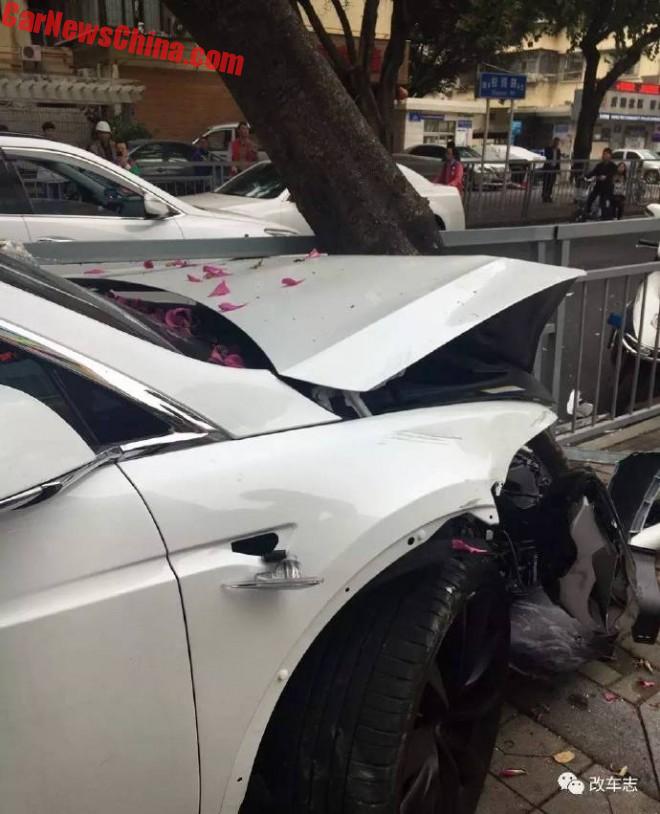 So what happened here exactly? It seems that the driver / autopilot was trying to make a turn to the right on the pavement, but somehow he cornered too wide and the vehicle hit the guardrail and then the tree. It was clearly a hard impact so the car must have had considerable speed. 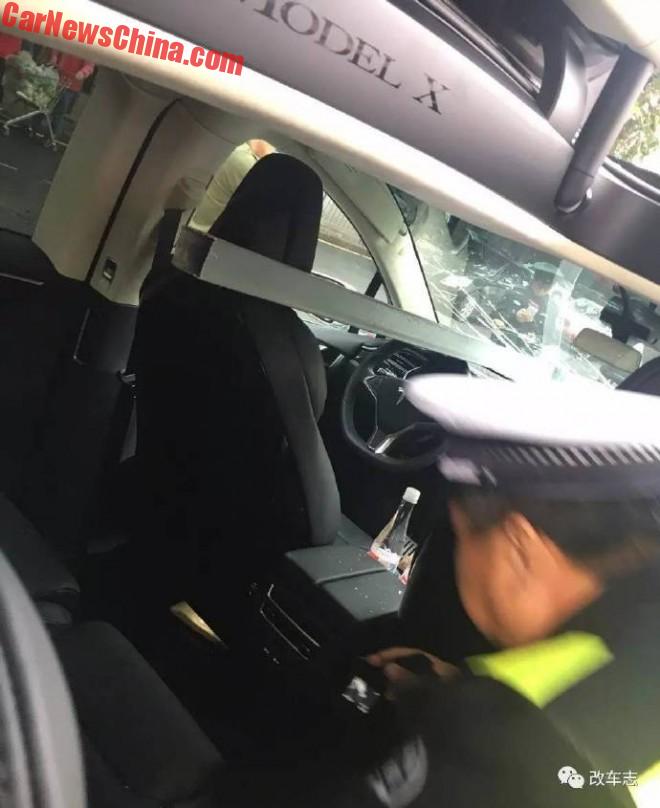 Fortunately the guardrail penetrated right trough the middle, missing the driver and ending up in front of the center-passenger seat. Policeman takes photos. 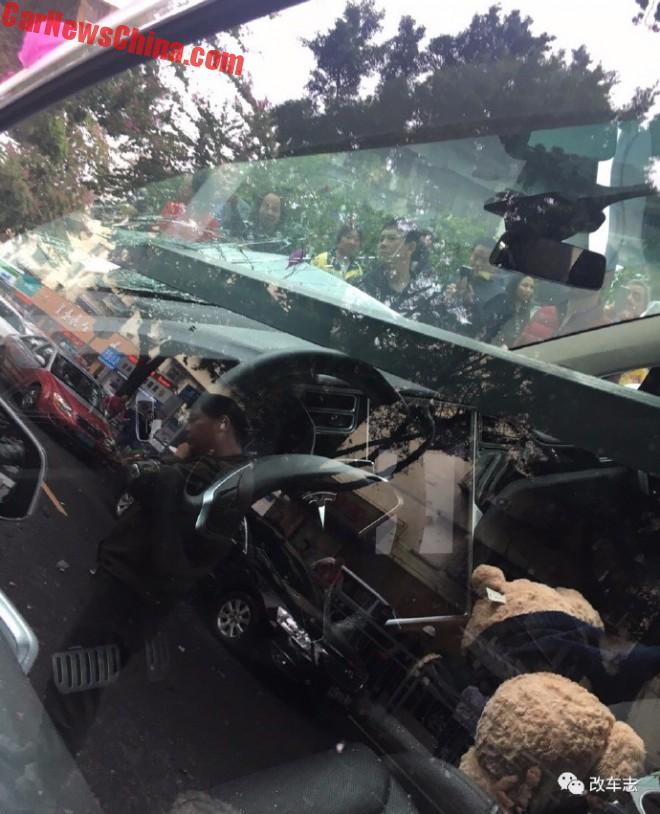 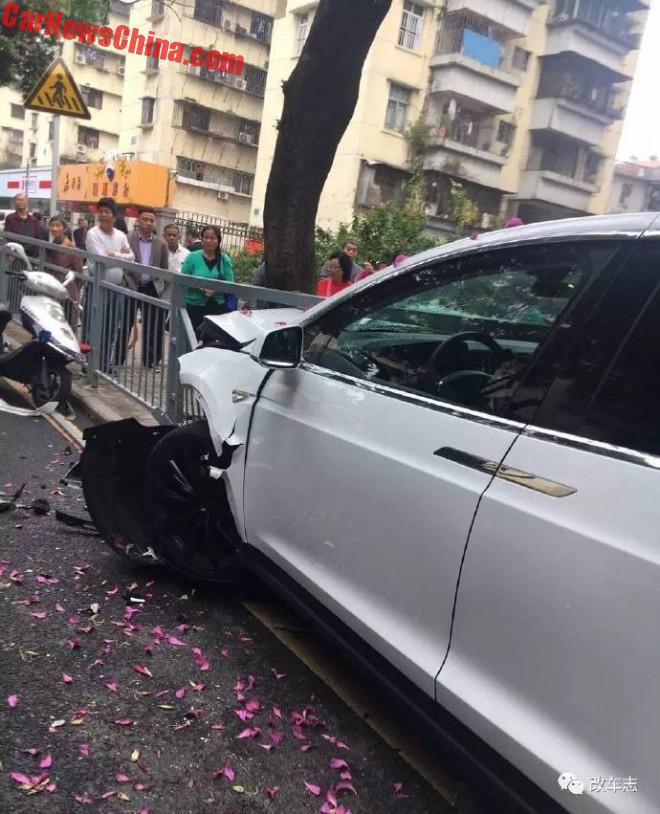 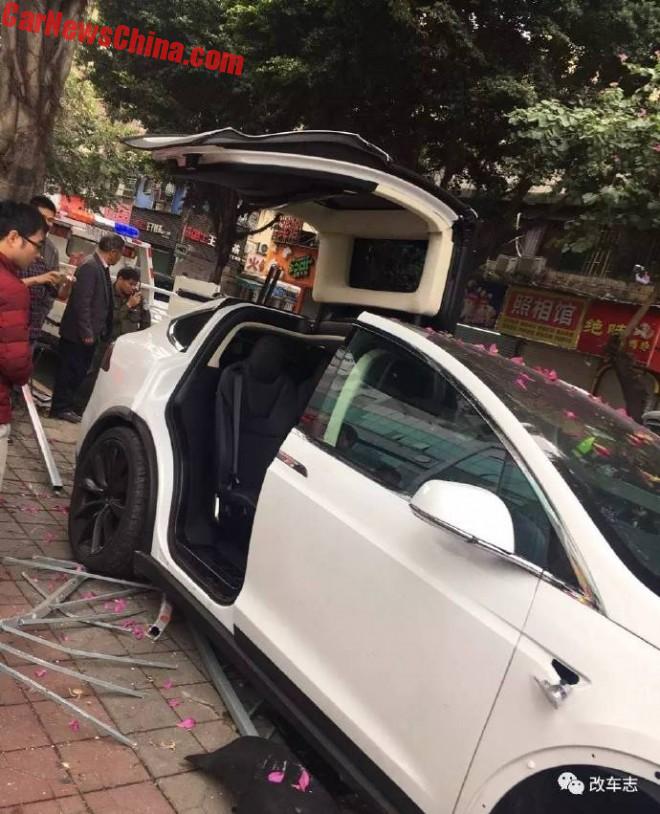 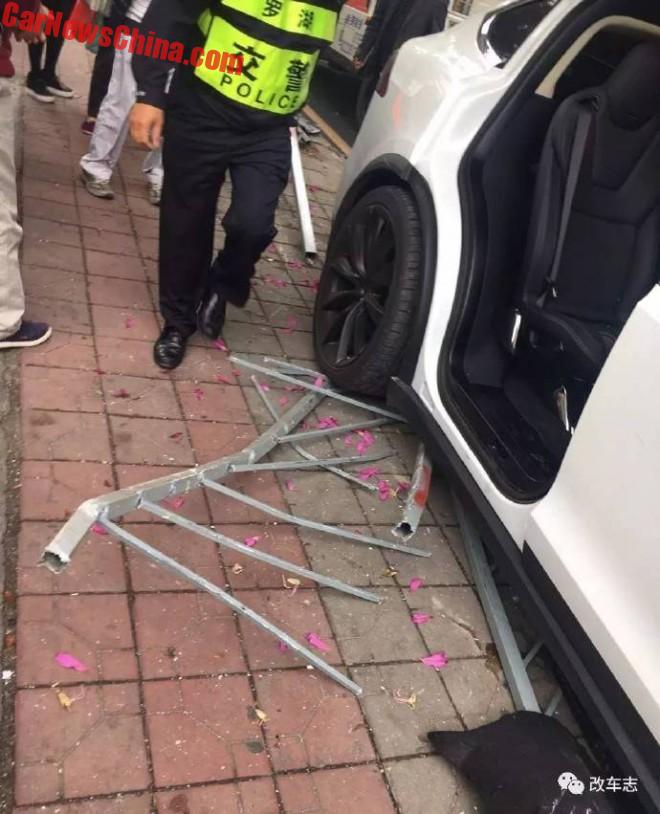 Parts of the rail ended up under the car. 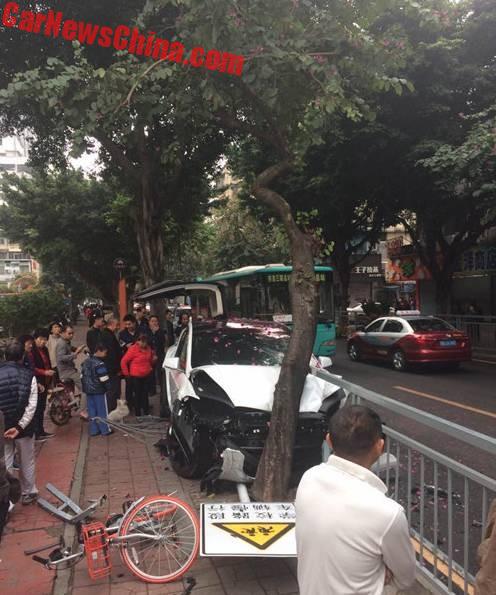 Road sign warning for school children went down, and an orange Mobike shared-bicycle fell over. 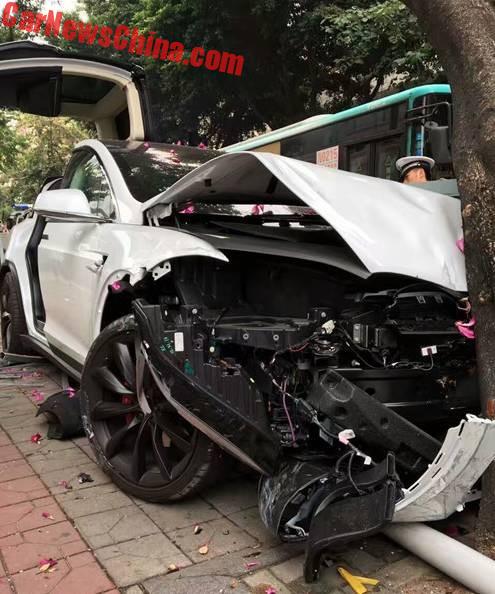 Tree made good work of the Model X. 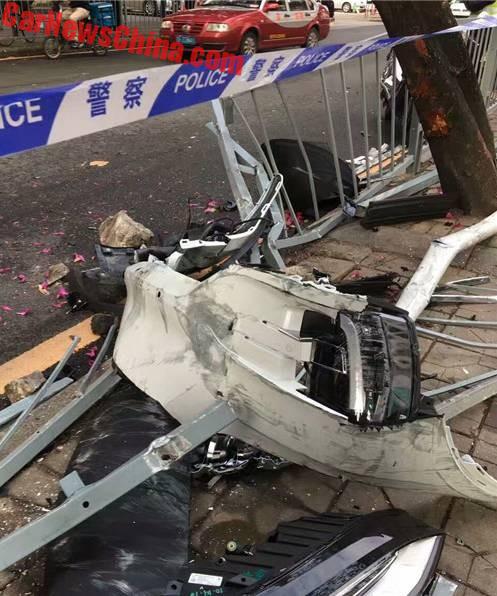 The lower rail of the fence penetrated part of the bumper. 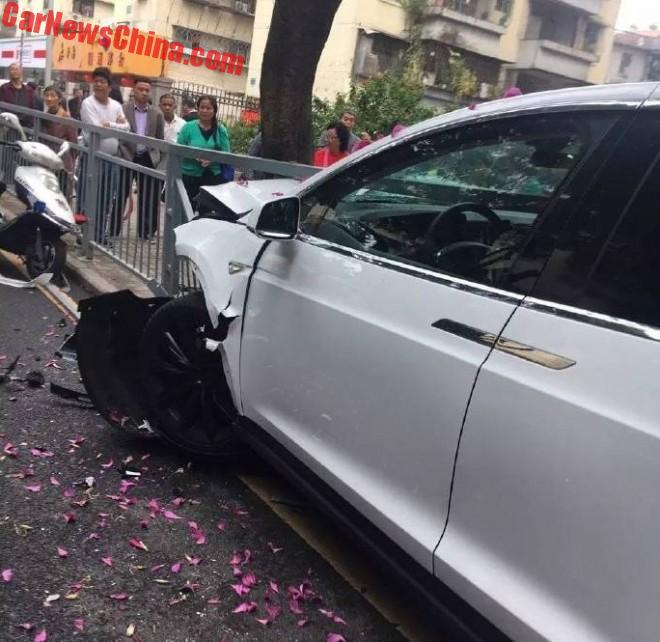 There haven’t been any meaningful updates about the crash since January. We will try to find out more.