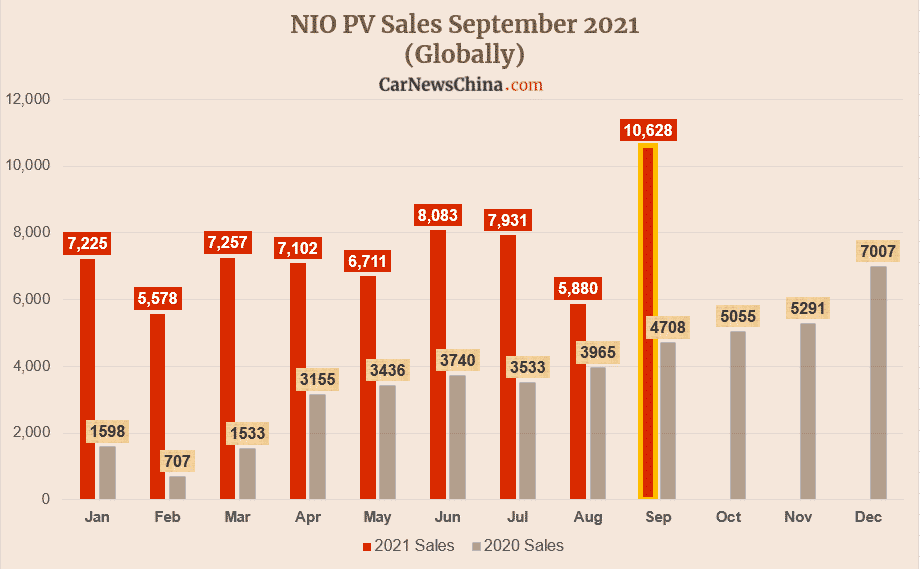 NIO announced September sales data, delivered 10,628 vehicles globally in September 2021. In the last report of CarNewsChina, we informed about Nio’s internal delivery target of 10,700 cars in September. According to leaked information, Nio broke the threshold of 10,000 sold vehicles on September 28.

This is exciting news. Nio broke the 10,000 delivered cars/month for the first time, and Chinese media congratulate Nio on joining the so-called ’10k club’ of automakers. Xpeng also joined the club with 10,412 delivered cars in September. Under the unfavorable situation of the continued global epidemic this year, the reduction of chip production, and the sharp increase in aluminum foil prices, NIO got rid of the “ghost” in August. They ushered in the “brightness” of September.

September seems to be a lucky month for NIO. In September 2020, NIO delivered 4,708 vehicles, a synchronous increase of 133.2%, setting a new high for monthly deliveries. A total of 12,206 taels were produced in the third quarter, an increase of 154.3% year-on-year, and a record quarterly delivery.