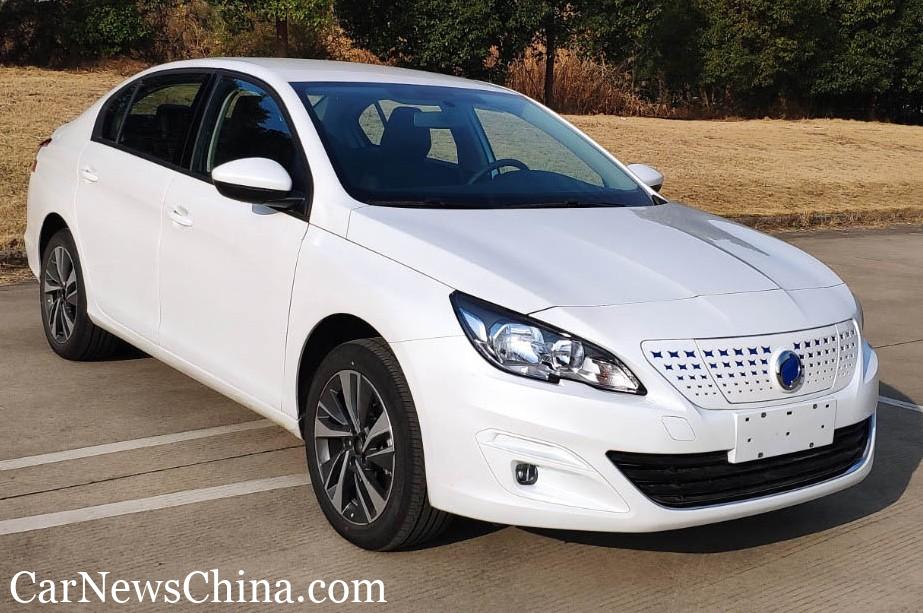 This is the new Dongfeng Fukang ES600, an electric car based on the Dongfeng-PSA Peugeot 408. It will launch on the Chinese auto market later this year.

‘Fukang’ was a household name in China in the 1990’s and early 2000’s. It was the name of the Chinese version of the Citroen ZX, one of the first affordable mass-market middle-class cars on the Chinese market, also made by Dongfeng-PSA. In the mid-2000’s the Fukang name was replaced with the more French-sounding Elysee series.

The first one is the Dongfeng-Fukang e Elysee (e爱丽舍), based on the petrol-powered Dongfeng-Citroen Elysee, and that is indeed a descendant of the original Fukang Elysee. Output is 61 or 82 hp, claimed range is always 300 km NEDC. Price starts at 129.800 yuan ($20.400).

The new flagship sedan is called the Dongfeng-Fukang ES600. It is based on the petrol-powered Dongfeng-PSA Peugeot 408 sedan. Design changes are minimal. The biggest difference it the nose, with a new closed grille with charging point, a new bumper, and it has a new bonnet too. Otherwise, it is largely the same design as the 408, even the alloy wheels are same:

The Peugeot 408 sedan is aging. Production started in back 2014 and its long overdue replacement is on the way. But every car gets a second and third life in China, so even before it really dies the 408 will live on in the Dongfeng-Citroen ES600.

Badge on the left: Dongfeng-Fukang. The ES600 is powered by a single electric motor manufactured by Dongfeng Motor. Output is 150 hp. The same motor also powers the ES500, but the ES600 is a larger car, so top speed is only 140 km/h. Curb weight is 1573 kilo. For comparison, the Peugeot 408 weighs 1325 kilo. As the ES600 is a more upmarket vehicle I expect it will be aimed mainly at the private market, where competition is fierce.

While it is nice that the Fukang name is back, it is a bit sad that it is used for a basket case of low-tech electric vehicles based on aging or discarded petrol cars. Perhaps Dongfeng-PSA should have been wiser, using the Fukang name for a more innovative and all-new EV brand.