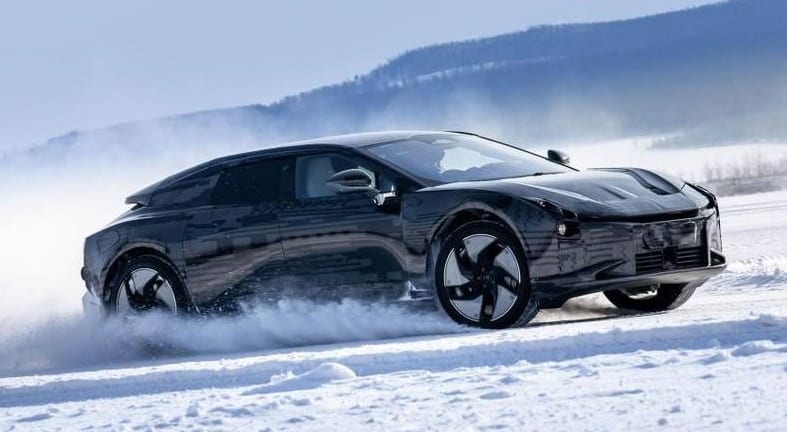 The HiPhi Z recently completed the extreme cold test in an environment of -35 degrees Celsius or -31 degrees Fahrenheit in Yakeshi, a city in Inner Mongolia Province in China. The spy shots were provided by the vehicle’s manufacturer Human Horizons. The HiPhi Z adopts a 2+2 seat layout. A five-seater version is planned for release in the future.

The new car is scheduled to be unveiled at the Beijing Auto Show in April and delivered this year. The HiPhi Z, a futuristic digital GT, will be the second flagship model for Human Horizons designed with a ‘digital soul, giving it a depth and personality that owners can experience human-like interaction and feeling,’ according to Human Horizons CEO and Founder Ding Lei.

Judging from the latest spy photos released by Human Horizons, the production version is almost the same as the HiPhi Z released in November 2021, with two differences. A traditional rearview mirror replaces the original rearview mirror with a camera. The new car also adopts a unique wheel shape.

The official body dimension has not been released. But from the released images and videos, the HiPhi Z looks longer than the HiPhi X. The Intelligent Signal Display light system is added to the side door panel and rear. The rear design of the new car is quite simple, with minimal extra decorations.

The car’s rear is equipped with an active wing that can be automatically raised and lowered. The rear bottom comes with a double-sided diffuser.

In the interior, a new fabric material has been introduced that is similar to peacock feathers. It displays a dark green color under the light and can change color with angle and light variations.

The new car also comes with four-wheel steering and a rotating screen.

Human Horizons even offers the HiPhi app for smart remote control of the vehicle, gives information about nearby charging stations, and provides HiPhi news updates.

The HiPhi Z has completed more than 600,000 kilometers of the road test. According to Human Horizons, the HiPhi Z saw an improvement in the charging speed, energy consumption, low-temperature charging estimation time, and remaining mileage prediction accuracy in the extreme cold test.

For enhanced battery life in winter, HiPhi Z introduced more sensory information to predict energy consumption to improve the accuracy of displaying the remaining range. By optimizing the air conditioning software, the heating rate of cold start was increased by 15%. For example, in an environment of -20 degrees Celsius or -4 degrees Fahrenheit, the outlet air temperature in the cockpit can reach 27 degrees Celsius or 80.6 degrees Fahrenheit in under one minute.

The power and battery life details are not yet released; we will keep an eye on this information.