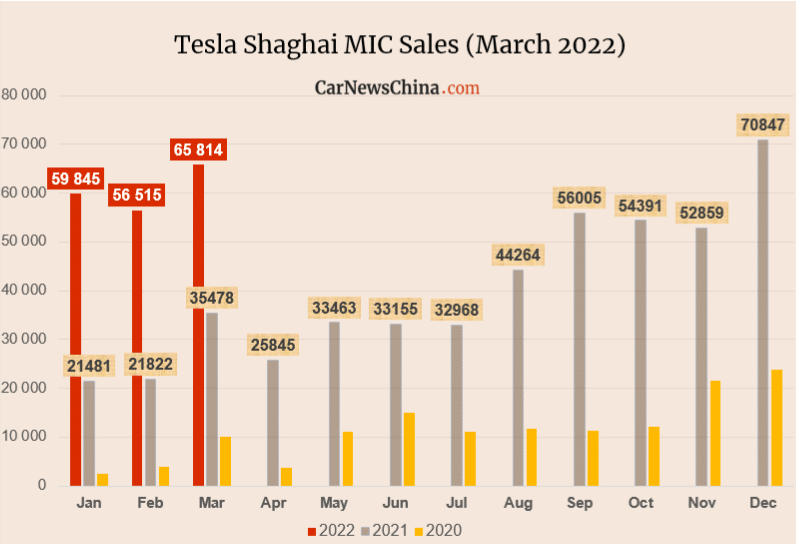 China Passenger Car Association (CPCA) has shared the March sales volume for Tesla Shanghai. Traditionally, Giga Shanghai focused on the domestic market at the end of the quarter. So it is not a surprise The Shanghai plant exported only 60 vehicles. Domestic MIC (made-in-China) deliveries were 65,814, almost doubling YoY – in March 2021, it was 35,478 MIC cars.

The Gigafactory in Shanghai, Tesla’s first plant outside the US, with an annual production capacity of 450,000 units, delivered 484,130 vehicles in 2021, representing 51.7% of its global total of 936,000 units. Moreover, Tesla plans to set up a design center in Beijing to develop cars specifically for the Chinese market.

We’ve already highlighted that Tesla Shanghai traditionally sells its cars mainly in China at the end of each quarter. And Q1 2022 hasn’t become an exception to this rule. Therefore, Tesla Shanghai exported 60 vehicles in March. On contrary, in February, Tesla shipped 33,000 more cars.

We should also mention that Tesla Shanghai was shut down on March 29 due to the COVID lockdown and has yet to reopen. The potential production loss for Tesla is at least 25,304 vehicles now and counting. Right now, it is unsure when Tesla Shanghai can resume production again.