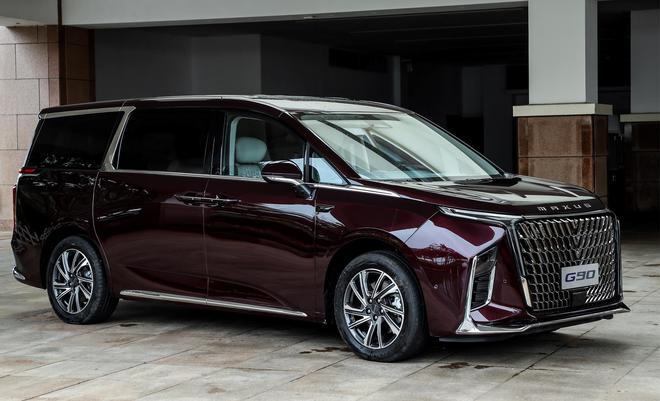 The latest model in China’s ‘Year of the MPV’ is set to launch on April 29th in the form of the Maxus G90.

If you think you’ve seen it before, it’s because you probably have. The G90 is the ICE-powered twin of the electric MIFA 9 MPV which launched in China last November.

By now all MPV manufacturers know the drill – if you’re going to produce an MPV, it needs to boast the largest grille you can muster, and here the G90 doesn’t disappoint.

The huge square grille, framed by vertical chrome strips and with a v-shaped mesh pattern, gives the G90 a very angular and blocky appearance and ensures the car won’t be winning any aerodynamic contests.

Narrow hockey stick-shaped running lights sprout sideways from the top of the grille while the main headlight units sit in trapezoidal flares on either side, also trimmed with heavy lashings of chrome that connect via a front splitter.

The G90’s boxy appearance continues into the side profile with a distinct two-box design, squared-off bonnet, and gently sloping roofline.

Chrome features continue alongside a Z-shaped strip running from the bonnet, along the waistline, up the C-pillar, and along the roofline. Another runs between the wheels along the skirts.

Large electric sliding doors for the second row are present on both sides of the car and should make ingress and egress a simple affair.

Five-twin-spoke alloys with a star-shaped boss help the G90 look pretty sharp as a result.

At the rear, the G90 exactly matches its MIFA 9 brethren with a distinctive X-shaped LED light running horizontally below the rear window and down the rear corner of the car, the vertical strands helping to break the impression of height.

Additional lights sit in the triangular recess between the running lights, as well as below yet another chrome strip right at the base of the G90 rear.

Wraparound windows are also a welcome design feature along with a small spoiler for aerodynamic purposes.

High-end Features All Round

Both drivers and passengers will feel at home in the G90 with some heavy-duty technological kit on display.

Ventilation outputs sit just under the screen unit and can be operated by touch-sensitive buttons on the shelf below the vents. On the centre console, a wireless charging pad, cupholders, and a dual-lid storage box all feature.

Drive is selected via a stalk behind the steering wheel, and a facial recognition camera on the A-pillar identifies the driver and remembers their settings.

In the rear, yet more luxury is on show. Four captain’s chairs with arms and footrests ensure all passengers get the star treatment.

Second-row passengers also benefit from integrated digital screens in the armrests which control features on the 10-inch screens that sit on the back of the front seats.

The chairs are electrically adjustable and also feature built-in cupholders and tray tables.

Expect the Maxus G90 to compete with the GAC M8 in its home market.

Maxus is part of the Shanghai-based SAIC group.