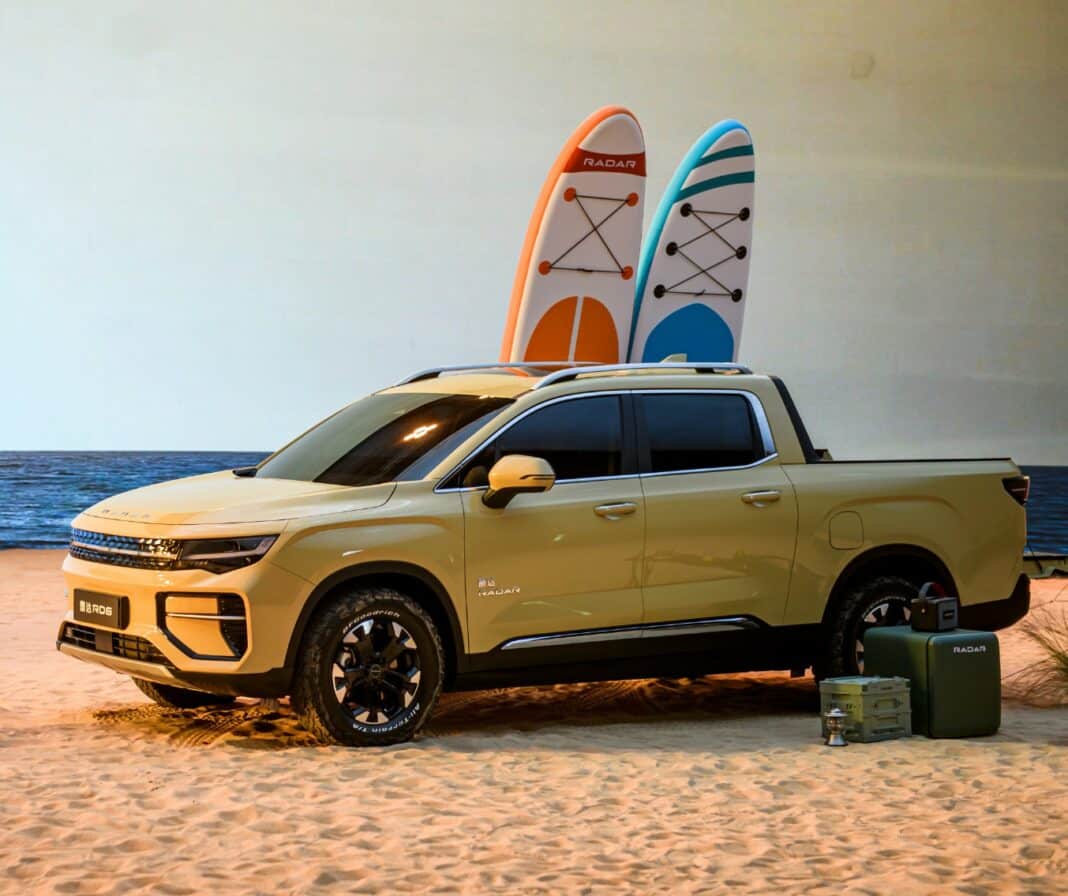 This is the Radar RD6, the first car of Geely’s new Radar EV brand. The Radar RD6 looks very cool with a hip and modern design, sporty wheels, and a short front overhang. The R6 is based on Geely’s Sustainable Experience Architecture (SEA) platform, it’ll have a range of 600 kilometers.

The Radar brand is aimed at young professionals living in big cities who like to go out to the beach or the mountains in the weekend. This is a booming business and lots of Chinese car makers are launching brands or sub-brands aimed at exactly this consumer group. The Radar brand will launch at least four other new cars in the near future: an SUV, a sedan-coupe-pickup truck, a large SUV, and an ATV (RD6 is in the middle of the pic).

Radar hasn’t disclosed the size of the RD6 yet, but it appears to be about the size of a Toyota Hilux. The company will offer rear-wheel drive and four-wheel drive variants of the RD6, with output ranging from about 200 to nearly 400 hp. That should be enough to carry five folks and two Radar-branded surf boards.

Talking about branding: as Radar is a lifestyle brand there will be a lot of co-branding. This too is very popular in China right now, with car makers offering anything from branded shoes to electronics and even to cookies. No kidding. On this image we see a Radar branded camping fridge and a Radar branded digital radio.

The Radar RD6 has the English and Chinese brand names on the door. The Chinese brand name is 雷达, leida, which means ‘radar’. The interior has two separate screens; one for the instrument panel and one in the middle for the infotainment. The RD6 goes with old-school door handles instead of modern pop-out handles. Perhaps Radar judges pop-out handles were not outdoorsy enough.

Radar also released images of what seems to be a higher-end variant of the RD6, this time in a cityscape. It has a two-tone paint job with sporty red detailing. It seems to have a cargo-bed cover too.

The Radar RD6 seems a promising car and launching a brand aimed at urban trendy folks is probably a good idea. Update: Radar just announced that the RD6 will launch on the Chinese car market on September 9. No further info on specs yet. We’ll keep you posted!