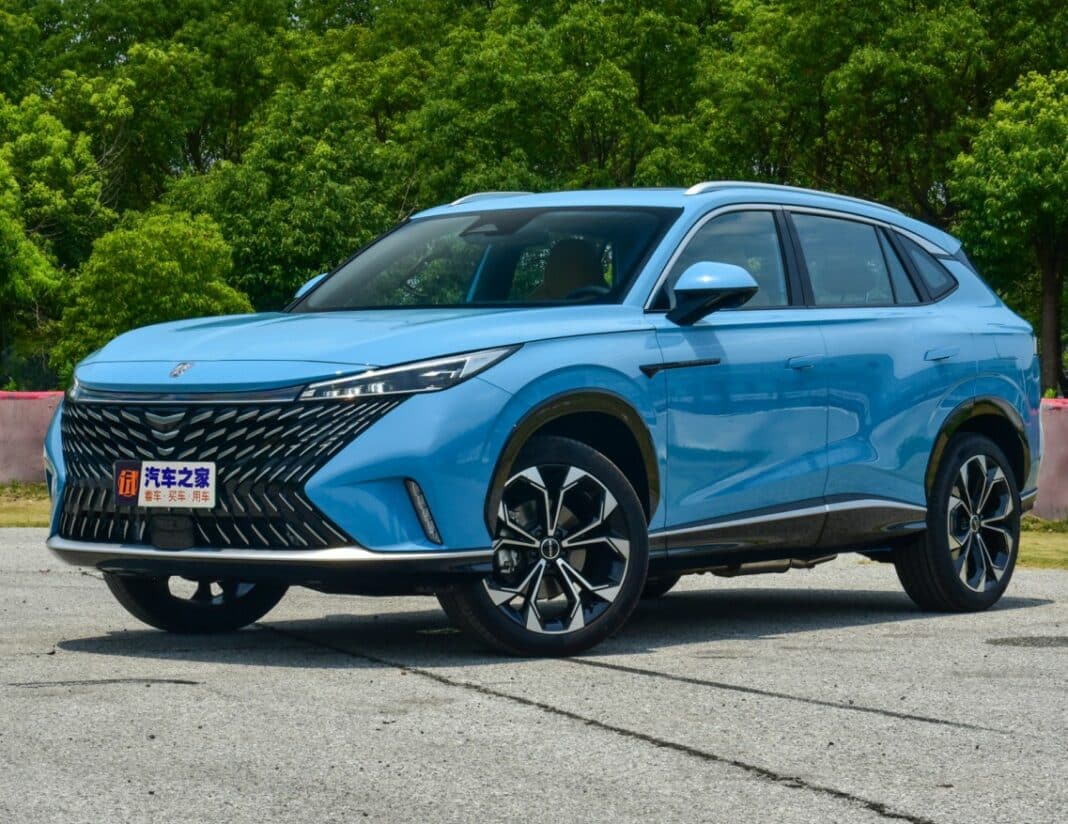 The new Roewe RX5 and eRX5 have launched on the Chinese car market. The RX5 is the petrol version and the eRX5 is the PHEV. Before we go any further, let’s talk about exhaust pipes. As you can see, the exhaust pipe is clearly visible under the vehicle. The blue car on the photo is the plug-in hybrid.

You can see the entire pipe installation and the catalytic converter. It runs on from the motor up front via the left side of the car to the back. Why is it so visible? That ain’t normal isn’t it? No it ain’t.

This is the patrol version. No pipes or mufflers in sight.

The hydride again. One needs to drive careful with this car otherwise one needs to spend a lot of yuan on new exhaust pipes. Those are not that cheap, not even in China.

It isn’t just a small part of the pipe, it’s really the entire assembly.

Now why? Well, I suspected the battery pack had something to do with it, so I started looking for a pic of the under-body. Found one:

Yup it was the battery pack indeed. The platform of the RX5 was originally developed for petrol-powered cars. To turn it into a hybrid they had to bolt the battery pack under the bottom. But apparently they hadn’t really though about a new proper spot for the pipe. So they…

… made the pipe run around the battery pack! With the catalytic converter on the left side of the pack, almost at the edge of the body. That’s just nuts. Normally, the pipe would run through a recessed half-tunnel in the center. But with a battery pack in place, there was no space.

The patrol version for comparison. Seen from the rear, the pipe runs slightly to the left, then to the middle and then straight to the front. It always stays within the under body.

And the catalytic converter sits neatly in the middle, where it is supposed to be.

On the hybrid, most of the pipe is located below the under body. This solution is totally bizarre, and, in a way, very Chinese. Just find a fix on the go! But it makes one worry about maintenance and even safety issues. And it looks very ugly.

We also learned that the pipe tips are fake on both the petrol and hybrid. But that’s not big news. anyway, enough now about pipes. Let’s have a look at the rest of the car.

This is the third generation Roewe RX5. The first debuted in 2016 and the second in 2019. However, as is common in China, generations have been and will be sold alongside each other. The first generation is actually still on sale right now but will be discontinued before the end of this year. The second generation, called the Roewe RS5 Max, will continue for at least another two years.

The interior of the new RX5/eRX5 looks great. Party piece is the one-piece 27 inch screen. This screen can be software-divided into two parts if the occupants may with so. But on the images it shows the screen with a single image view. The steering wheel has an interesting shape, almost oval with a flat bottom, and it has a very cool 2/3 spoke design. The center tunnel is high and wide with two cup holders and a large shifter. The leather and other materials are luxurious for the segment.

There is a storage area under the center tunnel.

A good looking new Roewe with a beautiful interior and lots of power in PHEV form. But that situation with the pipe is just too weird.