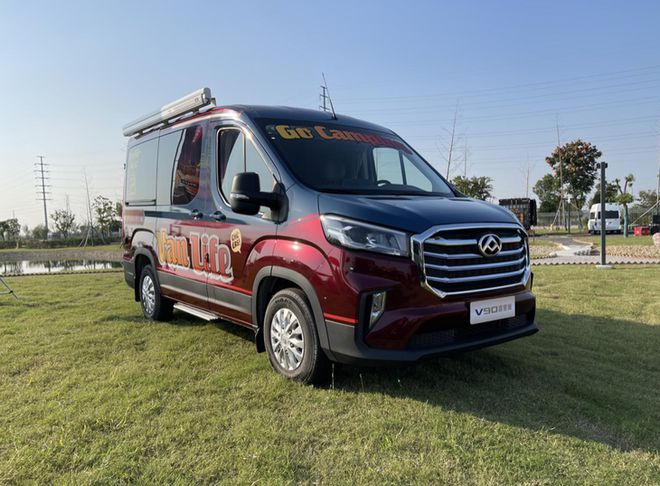 Launched in 2019 at the shanghai auto show, the SAIC Maxus V90 was built to replace the V80. Since then, SAIC has sold the vehicle in multiple European markets as the Maxus Deliver 9 and its electric variant, the eDeliver 9. On 11th October, the company launched a camping edition of the Maxus V90, in addition to the Maxus EV80 plus.

At the launch, the automaker also revealed that a new entry to the Maxus light passenger family – the V70 – would debut at the Guangzhou Auto Show holding at the end of the year. Let’s take a closer look at the newly launched models.

Sharing the same architecture as the SAIC Maxus V90, the V90 Camping Edition comes in two colors; purple and blue. Apart from its good looks, the light passenger vehicle also does well in terms of practicality. One of its notable standouts is the ample trunk space with a max volume of 8.2m³.

For seat configuration, drivers and front seat passengers are treated to swivel seats, while there is a multi-purpose table board in the passenger segment. Other features include solid wood floors, built-in thermos cup holders, wireless phone chargers, and a 1900mm sliding track.

Where it matters the most, the vehicle is equipped with a new SAIC π2.0T high-performance diesel engine that can churn out 110 kW of power and a max torque of 375 Nm, and buyers can choose between an automatic or manual gearbox.

For infotainment, the vehicle is fitted with a 10-inch HD touchscreen compatible with voice control and mobile phone interconnection. The Maxus EV80 Plus is equipped with a lithium iron phosphate battery and a permanent magnet synchronous motor that churns out 120 kW of power. Power consumption is rated at 21 kWh/ 100 km, and the battery has an automatic power-off function after collisions.

Overall, the SAIC Maxus fleet of vehicles has performed well in China and international markets. Currently, the brand has touched over 70 countries and sold more than 350,000 units. In September, the SAIC shipped 8,072 units of the Maxus light passenger fleet, bringing the total sales to 53,667 units for January to September 2022.