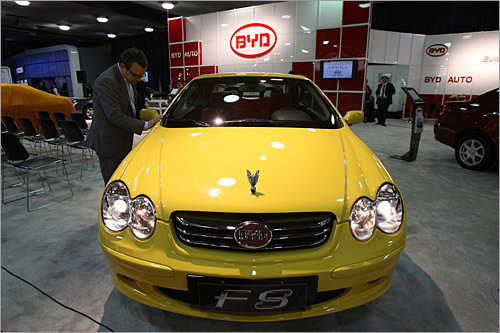 International media reports on a deal between Daimler and BYD to make electric cars. Strangely, Chinese media reports nothing yet. It is 10:13 AM now in Beijing and all woke up. It might have to do more with the fact that parties still need government permission to start with their plans.

That permission is essential, as proved by the Hummer-misery in Januari. But in this case it is about electric cars which are, so most believe, not as bead for the bears and the bees as a Hummer. Permission therefore, is unlikely to be denied.

More on the Daimler-BYD deal in this excellent article from Wall Street journal:

“BEIJING—Germany’s Daimler AG and China’s BYD Co. set up a 50-50 joint venture Thursday to develop an all-electric car for the Chinese market, saying they believe China has the potential to be among the world’s largest markets for zero-emission vehicles.

Daimler, owner of luxury-car brand Mercedes-Benz, and BYD, one of China’s leading battery and auto makers, are expected to invest a total of 600 million yuan ($87.9 million) in the joint venture, Shenzhen BYD Daimler New Technology Co. The money is to be used as registered capital for the joint venture in the southern industrial city of Shenzhen.

BYD Chairman Wang Chuanfu and Daimler Chairman Dieter Zetsche signed a contract in Beijing Thursday to finalize the agreement. “Our new joint venture is well positioned to make the most of the vast potential of electric mobility in China,” Mr. Zetsche said.

To strengthen and expand its presence in China, the German company said it plans to invest about €200 million, or about $244 million, to build a plant in Beijing to produce engines, which will be used to power vehicles it produces in China.

“For Daimler, this is a historic decision because this will be the first time ever that we’re going to produce engines for Mercedes-Benz cars outside of Germany,” Trevor Hale, a Beijing-based Daimler spokesman, said in an email message. The new engine plant will be jointly operated with Beijing Automotive Industry Holdings Co., Daimler’s main joint-venture partner in China.

According to a Daimler executive familiar with the BYD collaboration, the planned car is likely to be loosely based on the pure-electric propulsion system used in BYD’s e6, an all-electric battery car that the Chinese company began selling to taxi operators in Shenzhen earlier this year.

The car announced Thursday will be enhanced with Daimler’s vehicle-safety and other technologies.

Daimler engineers and designers recently established a base at a hotel near BYD’s headquarters in Shenzhen to work closely with their counterparts at the Chinese company, which is partially owned by Warren Buffett’s MidAmerican Energy Holdings Co., in order to come up with the joint venture’s first car for the new brand.

The Daimler executive familiar with the collaboration said Daimler and BYD might display a prototype of the jointly developed car as early as the Paris auto show in October.

One reason for the growing enthusiasm in China around all-electric cars and other heavily electrified vehicles, such as plug-in electric hybrids, is the belief that the Chinese government will start offering special incentives to support private buyers’ adoption of clean-energy cars.

Executives at Japan’s Nissan Motor Co., which plans to launch an all-electric compact car called the Leaf in the U.S., Europe and Japan in December, and in China next year, say they expect the Chinese government to set purchase incentives of as much as 60,000 yuan for electric cars. Chinese news reports have said incentives of about 50,000 yuan to 60,000 yuan are likely to be announced soon.

Still, even as auto executives such as BYD’s Mr. Wang urge the Chinese government to subsidize private purchases of all-electric battery cars, some Chinese government officials have pointed to reservations about providing consumer incentives to spur electric-car sales.

“Why do we need to provide subsidies and rebates for wealthy private buyers who would be the first in line to buy electric cars? That’s a question some of us in the government are asking,” said Chen Jianguo, a senior official at the National Development and Reform Commission, China’s main economic-planning agency, at a conference in Tianjin last year.

Yet, in anticipation of some type of policy support for private electric-car purchases, some auto makers are likely to launch electric cars in China over the next few years, creating competition for BYD and Daimler.