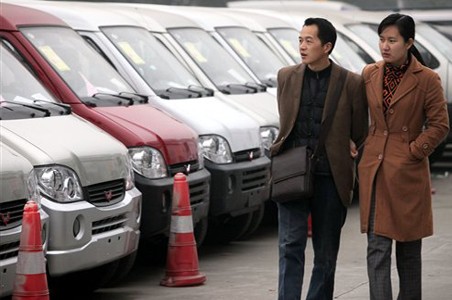 From state media, the news is good again:

Auto sales in China grew 34.76 percent from a year earlier to 14.68 million units in the first 10 months of the year, exceeding the total number of vehicles sold last year, the China Association of Automobile Manufacturers (CAAM) said Tuesday.

The combined sales of passenger cars, buses and trucks are expected to surpass 17 million units this year and China will keep its position as the world’s largest auto market and maker, CAAM said.

In October, auto sales rose 25 percent from a year earlier to 1.54 million units. Passenger car sales rose 27 percent in October to 1.2 million units, bring the total in the first 10 months to 11.1 million, also surpassing the number for the whole of last year.

The National People’s Congress, China’s top legislature, is reviewing the draft law to increase taxes on vehicles with engines larger than 1.6 liters, especially gas-guzzling cars with engines over 2.5 liters.