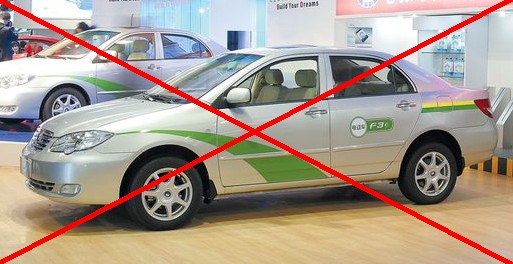 Electric cars won’t work in China, not now and not in the next few years. Why? There is no infrastructure to charge electric cars, at all. There are a few pilot projects here and there but those usually only work with one kind of car and nothing else. With ‘infrastructure’ I don’t mean special superchargers only, there is no ‘normal’ 220V infrastructure for charging either.

Not in parking lots, not in underground parking lots, not at malls, nowhere. Chinese people can’t charge their EV’s on their driveway at home because they don’t live in houses with driveways (99% doesn’t), they live in high rise appartments with underground parkings which have no infrastrcuture so they can’t charge their cars when sleeping, or when working.

BYD agrees and decided to kill the F3e, a dreamlike vehicle that could drive 300km on one charge and charge 70% in only 10 minutes. The kill comes bacause BYD believes the neccesary infrastructure is missing. How did they get that one? BYD:

The F3e will not be put into production “due to the lack of an enabling environment for electric cars in China,” said Wang Jianjun, deputy general manager of BYD Automotive Sales Co Ltd., in an interview with China Business News.


“After a market investigation and consultation with the dealers, everyone thought there were still problems with the supporting infrastructure and market environment at the moment,” Wang told the paper.

Well indeed, BYD. They could have seen that one coming years ago, guess they actually did, but who wants to dissapoint mr. Warren Buffet? BYD’s decision also proves that government subsidies alone don’t help. BYD will now focus on the F3M, a plug-in hybrid. But now, wait a minutos, ‘plug-in’, plug-in to what?