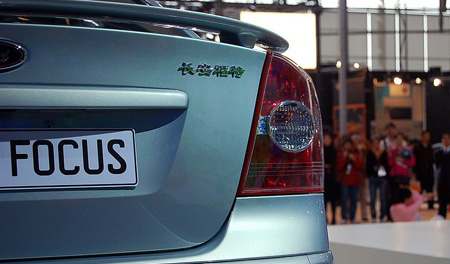 BEIJING – US automaker Ford said Friday that its sales in China, the world’s biggest vehicle market, soared 40 percent year-on-year in 2010 to an annual record of 582,467 units.

The strong growth was driven by sales of the Focus and Fiesta brands, Ford said. These models benefited from the government’s incentive policies aimed at boosting sales of small cars during the global financial crisis.

Sales in December rose 52 percent year on year to 56,880 units, Ford said.
“We are grateful to our partners and Chinese consumers for yet another year of record growth in one of the world’s most dynamic markets,” Ford Motor China chief executive Joe Hinrichs said in a statement.

Ford did not provide a forecast for 2011. Sales however could be affected as China withdraws stimulus measures introduced to cushion the impact of the global economic downturn.

The government raised the purchase tax for small passenger cars to 10 percent starting this year, ending an incentive policy that helped the nation overtake the United States as the world’s top auto market in 2009.

The country’s auto sales totalled 16.4 million units for the first 11 months of 2010, up 34.1 percent from a year earlier, according to data from the China Association of Automobile Manufacturers.