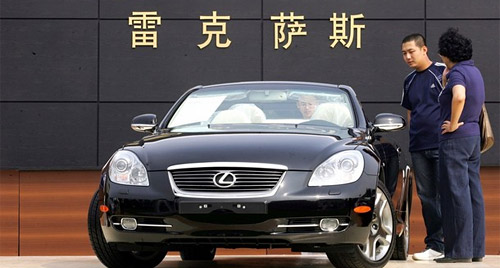 Toyota’s announcement of its recall plans in China came one day after the AQSIQ, China’s quality watchdog, demanded an explanation from the Japanese car maker regarding problems with the Lexus.A spokesperson for AQSIQ on Thursday asked Toyota to “make a full explanation and provide detailed technical descriptions” following its claim that vehicles that were sold on the Chinese market were not defective.

According to Toyota’s announcement, 5,202 imported Lexus RX300/350 cars manufactured between February 2003 and July 2006 will be recalled in China starting March 23 due to possible safety hazards.

If this occurs, the accelerator pedal may become temporarily stuck in a partially depressed position, rather than returning to the idle position, Toyota said.

Owners of the affected RX 300/350 vehicles will receive a notification by first class mail beginning March and Toyota and Lexus dealers will implement the newly announced and amended recall remedies at no charge to the vehicle owners, it said.