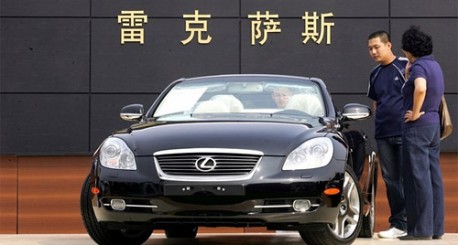 Even after a series of embarrassing recalls last year, Toyota Motor Corp’s Lexus managed to remain the No 1 luxury vehicle maker in the United States – a spot it’s held for 11 years running. In China, however, it’s an also-ran. Lexus sold just a fifth of luxury leader Audi AG’s tally last year in the world’s biggest car market. It also trails BMW Group and Daimler AG’s Mercedes-Benz.

To bolster the standing of Lexus in China, Toyota is turning to the feature that cemented its early success in the US: extreme customer service. Showroom amenities such as cappuccino machines, WiFi, Lego tables for the kids, and airport shuttles for busy executives dropping off their cars for servicing – standard touches among “luxe” brands in the US – took root in Lexus’ dealerships in the US during the 1990s.

To learn the latest in consumer coddling, Toyota is embedding two Chinese managers at Lexus’ US headquarters in Torrance, California. They’ll stay a year to learn all aspects of the luxury brand’s operations, rotating through sales, marketing, and customer service. Then they’ll return to instruct colleagues back home. “The US is the most sophisticated auto market in the world, in terms of our capabilities,” said Mark Templin, head of US Lexus sales.

The same cannot be said for Lexus in China. “Nothing stands out from Lexus’ service,” said Maggie Lin, the owner of a decorative stones business in Foshan, Guangdong province, who owns an imported Lexus RX sport-utility vehicle (SUV) and an Audi A6 sedan. “I don’t feel there’s anything special compared with what Audi has been doing. They are more or less the same.”

Lexus is adapting its models to fit local tastes. “Consumer needs are not all the same in each market,” explained Takeshi Uchiyamada, Toyota’s executive vice-president for research and product development. “In China, within the Lexus lineup we’re introducing smaller-engine cars favored by Chinese customers.”

Examples include the recently added IS 250 sedan and IS 250C convertible, whose 2.5-liter engines are much smaller than the 3.5-liter found in the RX SUV popular in the US. Lexus plans to sell a new entry-level hybrid Lexus, the CT 200h, later this year that will have sportier handling than Toyota’s Prius. The model, promoted as the “darker side of green”, will compete with BMW’s 1 Series, the Audi A3, and Mercedes-Benz’s B-Class models.

John Zeng, a Shanghai-based analyst for J.D. Power, said Toyota is at a disadvantage because it imports all the Lexus cars it sells in China. Importers pay a 25 percent custom duty and a 17 percent value-added tax. There’s also a consumption tax, based on engine size, that can be as high as 40 percent. That can make Lexus prices too high for younger buyers, Zeng said.

“Toyota insists on producing Lexus in Japan,” he says. “But if you want to achieve the volume of your competitors, you have to follow your competitors’ strategy. BMW, Audi and Mercedes-Benz are all focused on localizing production of their models.”

Analysts said Toyota has been reluctant to entrust non-Japanese plants with the luxury brand because they want to control quality and protect their intellectual property. The automaker is also moving forward cautiously after a year of global recalls for problems including quality glitches in Lexus models.

“Especially now, we’re not going all out to go as fast as we can in China,” said Karl Schlicht, head of the brand’s global product and marketing division. “We’ve learned a big lesson.”

Lexus’ underdog status is partly due to its later entry into China. It opened its first dedicated showrooms in the country in 2005, although it began importing cars in 1993. Audi is owned by Volkswagen, which entered the market in 1985.