Hyundai Motor to set up JV with Sichuan Nanjun in China 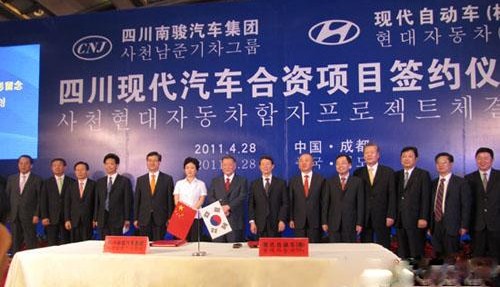 Hyundai and its Chinese partner, the Sichuan Nanjun Automotive Group, will each have a 50 percent stake in the joint venture, which will be called Sichuan Hyundai Motor Company, Sichuan Nanjun said in a statement.

With an initial investment of 3.6 billion yuan ($553.6 million), the joint venture aims to have an annual production capacity of 150,000 commercial vehicles by 2013.

Sichuan Hyundai, which will be based in the city of Ziyang in Sichuan, will also produce clean energy vehicles, including electric and gas-powered vehicles, as part of its the mid- and long-term plan, it said.

The company is targeting a long-term annual production capacity of 700,000 units by 2020.

The Hyundai Motor Company, based in the Republic of Korea, is the world’s fifth-largest automotive company and has car plants in several countries, including the United States, China and Russia. The company currently has a passenger car joint venture in Beijing.