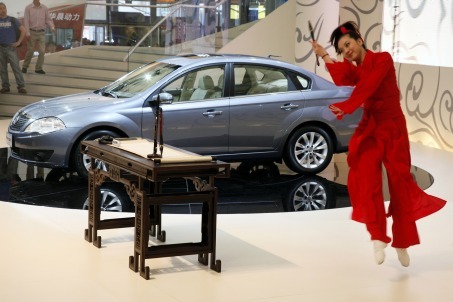 The nation sold 1.08 million of cars, sport utility vehicles, multipurpose vehicles and minivans during the month, a rise of just 1.3 percent from April 2010. However, sales registered a sharp decline of 13.1 percent from the March figure, the association said.The minivan segment, which has been the market’s major growth engine stagnated in April after the central government withdrew stimulus measures that have been in place for two years. Sales decreased 11.5 percent from the same month in 2010, and by 25 percent from March.

“The ending of the government incentive policy, a rise in petrol prices, car purchases and limits to vehicle use in large cities, plus the earthquake in Japan, all led to a slide in the domestic vehicle market,” said Rao Da, secretary-general of the CPCA. He predicted a negative growth rate for the market across the course of the whole year.

“Negative growth started at the beginning of this month (May), with sales in the first week dropping around 8 percent over last year,” said Cui.

Both Cui and Rao said they believe the market will face more challenges in the second quarter, as Japanese automakers slash production because of a parts supply shortage caused by the March 11 earthquake and the subsequent power crisis in their home country.

“The market share of Japanese automakers in China’s passenger vehicle segment declined from 21.88 percent in March to 15.46 last month. Some of their major models are facing zero inventory and have to be sold with orders,” said Rao.

He told China Daily that domestic sales in May will be adversely affected in the aftermath of Japan’s earthquake. “Japanese automakers still need three to eight months to recover.”

Dong Yang, vice-chairman of the China Association of Automobile Manufacturers, said that the rise in the price of petrol should not be ignored.

“If the oil price passes the barrier of 10 yuan a liter, it will be one of the major reasons to further slow down the automobile industry.”

April saw General Motors Corp, the biggest foreign automaker by sales volume, register its first year-on-year sales decline for two years. Its sales of 203,400 units represented a fall of 4.6 percent from the same month in 2010.

However, the luxury car segment is still enjoying rising demand in the local market, as Daimler AG’s Mercedes-Benz unit reported growth of 46.9 percent year-on-year, with 16,500 cars sold in China.

Vehicle imports in March hit a new record of 97,900 units, representing growth of 14.68 percent from last year and 70.97 percent higher than February’s figure.