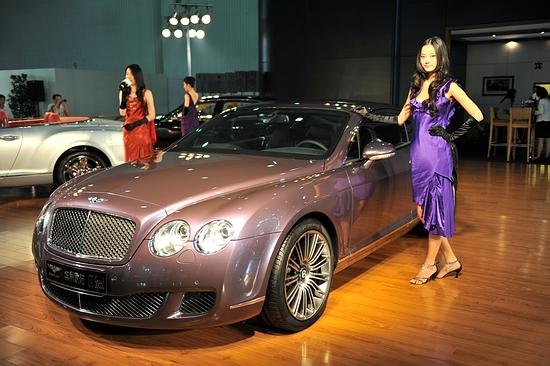 The figure made China Bentley’s second-biggest market, accounting for a quarter of the company’s global sales, Durheimer said.

Bentley’s China sales almost doubled last year over 2009 to nearly 1,000 units, as it then became the carmaker’s third-biggest market. “We expect a significant growth in China in 2011 and China will be our biggest market in the foreseeable future,” said Geoff Dowding, Bentley’s regional director for Asia and the Middle East.

Alasdair Stewart, a Bentley board member for sales and marketing, said the company has significant plans to further build the brand and expand distribution in China. He said the company will add dealerships this year in Wenzhou of Zhejiang, Zhengzhou in Henan, Erdos in Inner Mongolia, Xi’an in Shaanxi and Taiyuan in Shanxi.

Bentley now has 13 dealerships across the nation. Durheimer said Bentley will increase investment in research and development to meet the needs of Chinese customers. The company will also test some models in the country, he said.

“We will continue to offer new models that appeal to our Chinese customers – the importance of this market means we can begin to tailor our cars to regional demands,” he said. Bentley held its worldwide dealer conference last week in Beijing.

“This is the first time we have held such an important global event in China,” Durheimer said. Super luxury cars have huge prospects in China due to the mounting number of ultra-rich in the world’s second-largest economy.

According to the Hurun Wealth Report 2011, some 960,000 Chinese on the mainland had personal wealth of 10 million yuan or more by the end of 2010. The figure was up 9 percent from the previous year. China also had 60,000 people with personal assets of at least 100 million yuan, up 9.7 percent.