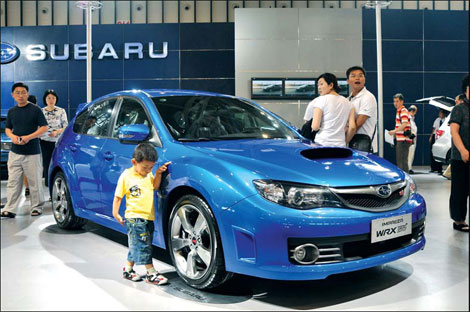 The report cited sources with knowledge of the deal saying that the two companies have “agreed on the major terms and conditions” to make Subarus in the northeastern coastal city of Dalian.

But Chery spokesman Jin Yibo told China Daily that the company currently has no information to release.

Earlier this year, Jin confirmed to domestic media that Chery was in talks with Subaru, but it was uncertain at the time whether the two would come to an agreement.

Japanese reports at the end of last year said Subaru was in final talks with Chery to build a 30 billion yen ($369 million) plant in Dalian with initial annual capacity of 50,000 cars that could eventually rise to 150,000 units.

Imported Subarus went on sale in China in 2004 and achieved robust growth in the booming SUV segment with its best seller, the Forester SUV. Its other products include the Legacy, Outback, Impreza, Tribeca and WRX.

Industry insiders have surmised that the Forester is most likely the first Subaru model that would be made locally.

China’s promising SUV market may double in size from 2010 to 2015, according to projections from market research firm JD Power.

Last year Subaru delivered more than 54,000 cars and SUVs in China, a 57 percent increase over 2009, which was outstanding performance for an import, according to analysts.

The momentum continued in the first four months of this year when 24,000 Subarus were sold in China.

But in the long run the brand may hit a bottleneck if it continues to solely rely on imports, according to Zeng Zhiling, director of JD Power Asia Pacific Forecasting.

Since big domestic auto groups already have several foreign partners and may not greatly value a deal with Subaru, the company has to find a well-matched partner, Zeng said.

Chery now has no joint venture partner so it could invest “100 percent energy” in the relationship, he said.

Despite uncertainty about government approval for the planned joint venture, Zhang Yu, managing director of industry consultancy Automotive Foresight (Shanghai) Co Ltd, said he is optimistic about the outcome.

Unlike some other niche brands with small sales volume, Subaru has an attractive product that could meet the regulatory requirement that auto joint ventures must produce at least 150,000 vehicles a year, Zhang said.

Chery, based in Wuhu, Anhui province, was the No 7 carmaker in China with sales of 680,000 vehicles last year. The company has invested substantially in research and development in own-brand vehicles in the past few years and gained a strong foothold in medium and low-end market.

The company previously failed in attempts to form partnerships with Chrysler and Fiat.