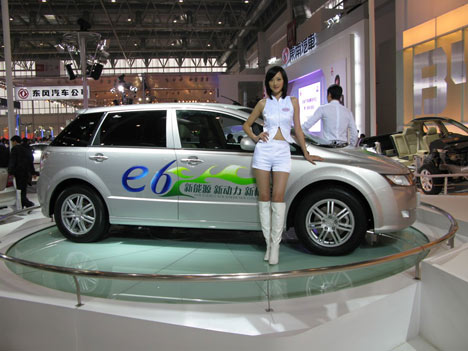 Chinese car maker BYD has warned that its first-half profit will shrink by about 95 percent amid stiff competition and the loss of a consumer car subsidy.

The company said in a statement late Tuesday that it expects a net profit between 121.1 million yuan ($18.7 million) and 363.2 million yuan in the first six months of this year, compared with 2.42 billion yuan a year ago.

BYD, backed by US investment titan Warren Buffett, said the decline was partly due to the removal of government car sales incentives, which were ushered in to cushion the impact of the worldwide economic downturn.

China’s auto sector overtook the United States in 2009 to become the world’s largest but it has lost steam after Beijing phased out the subsidies.

BYD also said the company’s cellphone components division would be dented by a delayed order from its single largest client, which it did not identify, according to the statement posted to the Shenzhen Stock Exchange.

The firm’s shares, which debuted in the southern Chinese boomtown last month, closed down 1.02 percent at 31.19 yuan on Wednesday, while BYD’s Hong Kong-listed stock ended three percent higher at HK$23.70 ($3.04).

The bleak earnings forecast comes after BYD recorded an 84 percent drop in first-quarter earnings, with a 12 percent tumble in operating revenue during the same period.