Automobile ownership in China to exceed 100m by year’s end 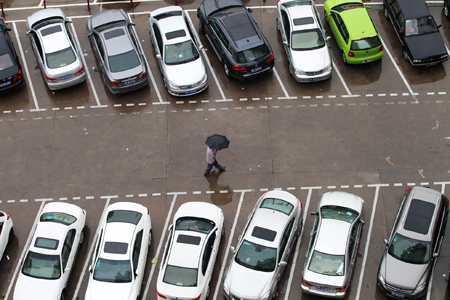 BEIJING – Despite a slowdown in automobile sales during the first half of the year, the number of vehicles in China is expected to exceed 100 million, climbing by 18 percent from a year earlier, experts said on Friday.

“There is no doubt that the number of automobiles in China will increase at least 15 million to a total of 100 million by the end of this year, although the sales growth of auto products has been weakened by strategic adjustment in the industry,” Zhang Xiaoyu, vice-president of China Machinery Industry Federation (CMIF), told China Daily.

Zhang said in the second half of this year growth in sales of private cars and buses will lead an increase across the industry, as market demand still exists despite lower growth in both production and sales.

According to data from CMIF, the year-on-year growth rate of auto sales slowed to 3.25 percent in the first half of the year, compared with 30 percent and nearly 50 percent annual growth rates in 2010 and 2009, respectively.

Production and sales of private cars numbered 4.92 million and 4.95 million respectively, rising by 7.03 percent and 8.02 percent compared with the previous year.

The slowing growth of auto sales resulted from the expiration of the government’s two-year period of incentives, including a reduced purchase tax and subsidies to trade-ins, and a limit on sales in big cities, which was aimed at easing congestion.

“The improvement of energy efficiency and development of ‘green’ vehicles are vital for China’s automobile industry as the vehicle population increases at a fast rate,” said Wang Fuchang, deputy director-general of the equipment manufacturing industry with the Ministry of Industry and Information Technology (MIIT).

“By 2020, the vehicle population will hit 200 million in China,” Wang estimated.

According to the CMIF, 50 percent of the total production of gasoline in China is currently used as fuel for automobiles. The annual production of crude oil is about 200 million tons.

“The strategic adjustment is targeted at accelerating the upgrade of the auto industry, spurring auto makers to speed up the development of new energy automobiles, instead of curbing auto sales in the long term,” Zhang said.

For the first half of this year, sales of sport-utility vehicles (SUVs) increased by 20 percent in the Chinese market. Imported SUVs witnessed an increase of more than 50 percent domestically.

To strengthen the development of the auto industry, domestic automakers are striving to promote car exports.

Data from the China Association of Automobile Manufacturers shows that the export volume of Chinese automobile products grew 32.44 percent to $24.9 billion, while the import value reached $28.7 billion, an increase of 26.99 percent year-on-year, for the first five months.