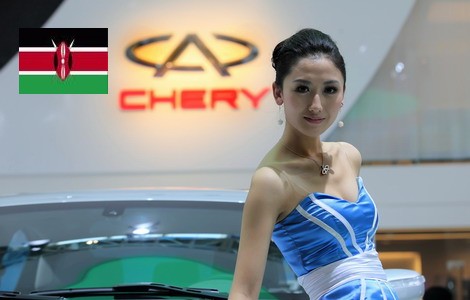 “They (Chery) are discussing with the (Chinese) government so that they can get some $50 million to invest in Kenya through an assembly plant,” said Justus Nguu, the director of Stantech Motors Ltd, Chery Automobile’s franchise holder in Kenya.

China has made big inroads in Africa, where it is seeking to secure energy, minerals and food.

Chery Automobile, which started selling cars overseas in 2002, and is now China’s biggest auto exporter, aims to set up its plant next year. In 2010, the company tested the market by venturing into Kenya through a franchise.

The automaker sold a modest 120 cars last year, but aims to produce 1,000 units in 2013 at its plant which will serve Kenya, East Africa’s biggest economy, and other countries in the region.

The Chinese will have to battle Japanese vehicles, which have saturated the Kenyan car market.

Toyota Motor Corp controls about 65 percent of the market, mainly through the second-hand segment.

The truck business is dominated by established players CMC Holdings Ltd and the Kenyan unit of General Motors Co.

Analysts said proximity to growing markets was the key driver for the companies planning to set up in Kenya.

“(The delay in) lead time for orders … has made it strategically important for auto manufacturers targeting Africa to want a serious presence in Africa,” said Hanningtone Gaya, an independent regional vehicle analyst based in Nairobi.

China’s truck maker, Shanghai-listed Beiqi Foton Motors, a unit of Beijing Automotive Industry Holdings Co (BAIC), plans to begin construction of an assembly plant in Kenya this year, to help it nudge up sales on the continent.

The company plans to double sales in Africa to 20,000 units by 2013 from last year by ramping up sales to economies that require heavy commercial vehicles for use in the construction of their infrastructure projects, including roads, rails and ports.

“When you look at the international markets, we are still young. Africa is a good market for us,” Calvin Guo managing director of the Kenyan subsidiary of Beiqi Foton Motors.