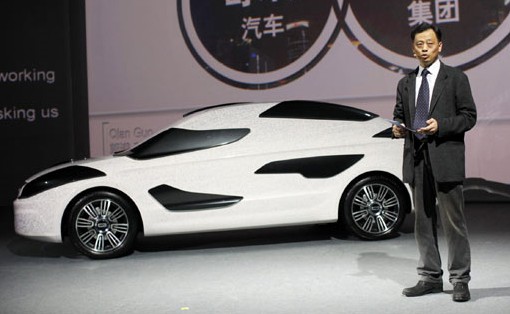 Chery Quantum, a joint venture between Chery Auto from China and Quantum LLC from Israel, unveiled its new brand, Qoros – Q for quality and ‘oros’ mimicking the sound of the word chorus. The first compact sedan car, whose sculpted image was presented, will hit the European and Chinese markets by late 2013, the company said.

Chinese carmakers have been shaking up the global auto scene with their deep pockets, with Geely buying Swedish brand Volvo Car, but so far their local brands have failed to break into the Western market, while China has been a key market for European carmakers for some time.

State-owned Chery, China’s biggest auto exporter, has made inroads into South America and Russia, but failed to make its mark in the US or Western Europe with its own branded cars.

Chery faces huge challenges — not only does Qoros need to set up a new factory, it also needs to build up a new brand from scratch, and overcome the image of made-in-China.

“You have the earn the trust,” said Volker Steinwascher, vice chairman of Chery Quantum, who worked for nearly two decades for Volkswagen, Europe’s biggest carmaker.

“That means the products that you deliver must have quality, no compromise on quality. They must look good, they must meet customer expectation,” said Steinwascher an automotive industry veteran, noting that Apple products are also made in China.

While the heart of the Qoros car, the engine, will be manufactured by Chery, he said it is developed by a Western firm and Chery Quantum would be checking its quality.

In its favour, Qoros has a top team of experienced auto experts and executives from the West.

“Clearly, the innate capabilities are there. The test is whether this new firm manages to execute the plan. Will they be able, for example, to create culture that insists on consistent, world-class quality while still keeping costs in line?”

Klaus Paur, Greater China managing director for Synovate Motoresearch, who has done some market research for Chery Quantum, said Qoros has a chance of following the success of Korean carmakers Hyundai Motor Co and Kia Motors Co and Eastern European car brands including Skoda owned by Volkswagen and Renault’s Dacia in Western Europe.

“All these brands have succeeded in offering value for money and this is why people are buying this.”

“Nowadays ‘Made in China’ has a negative connotation, a quality connotation, but overall speaking made in China does not have to necessarily be bad as long as the quality is on a certain level that the consumers are expecting,” said Paur.