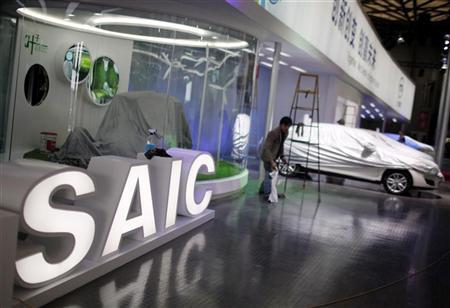 Top Chinese automaker SAIC Motor Corp Ltd has forecast a rise of more than 40 percent in 2011 net income on solid demand for German and American marques made at its Shanghai ventures.

“Growth was under expectations, but investors could be more bothered about the outlook for 2012,” said Cao Xuefeng, head of research at Huaxi Securities in Chengdu.

The world’s second-biggest economy is cooling, with annual growth easing to 8.9 percent in the fourth quarter of last year from 9.1 percent in the third, and a further slowdown is expected to keep pressure on corporate profits this year.

Its tie-up with GM sold 18.5 percent more cars in the year, with sales at its venture with VW up 16.4 percent, according to company data. The two ventures comprised 59.8 percent of SAIC’s overall tally.

The acquisition of some assets from parent Shanghai Automotive Industry Corp also helped boost earnings, SAIC said in a statement.

SAIC is expected to announce its full-year earnings on April 4.