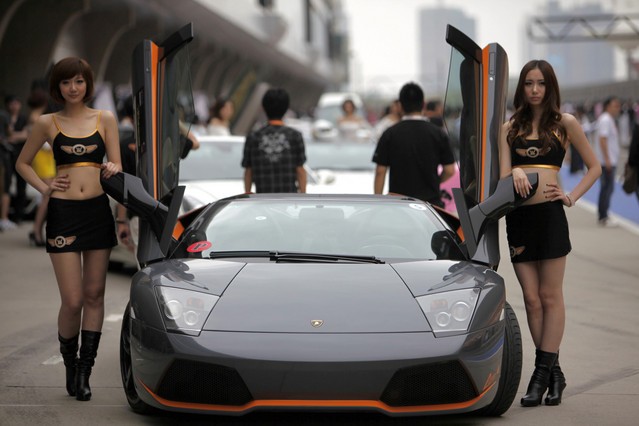 Lamborghini, maker of the $1 million Aventador LP 700-4, said industry sales of ultra-luxury sports cars may slow as signs that China’s economy is weakening puts off some buyers.

“If you look at the economy right now, there may be some uncertainty to make people wait a little,” Christian Mastro, Lamborghini’s Asia Pacific general manager, said in a phone interview on Feb. 16. “The number of people able to spend this kind of money is limited, it’s not unlimited.”

Growth in the world’s second-largest economy cooled to the slowest pace in more than two years in the fourth quarter and the trade ministry described the export outlook as “grim” last week. Lamborghini’s sales jumped about 70 percent in the country last year as rising incomes pushed up the number of Chinese millionaires and stoked demand for luxury goods.

Lamborghini aims to boost deliveries in China by 20 percent to 30 percent, less than half the pace of last year, as the sportscar maker can’t produce enough Aventadors to meet the 18- month waiting list, Mastro said.

Makers of supercars have come to a consensus that the segment will grow about 25 percent in China to about 2,000 cars this year, versus a doubling in 2011, Mastro said.
Marketing Drive

Lamborghini plans to spend 20 percent more on marketing this year and will hold more events such as track drives to spur sales, he said. The Sant’Agata Bolognese, Italy-based company will also expand the number of dealers this year by six to 20, opening in smaller cities outside Shanghai and Beijing such as Xi’an, Nanjing, Changsha and Shenyang, he said.

The typical buyer of a Lamborghini in China is on average 20 years younger than in Europe, according to the company. Chinese customers have to wait at least 18 months before taking delivery of the Aventador, which has a 700-horsepower V12 engine and can accelerate to 62 miles per hour in 2.9 seconds, Mastro said. The company also sells the Gallardo in the country.

Lamborghini plans to make 900 Aventadors globally this year and has sold out all 80 it allocated to China this year, Mastro said. The company has no immediate plan to raise the quota so as to ensure supply for other regions, he said.

The sportscar maker sold a total of 342 units in China last year, overtaking the U.S. as its largest market. The Volkswagen AG (VOW) unit more than doubled its deliveries in China to 206 cars in 2010, from 80 in the previous 12-month period.