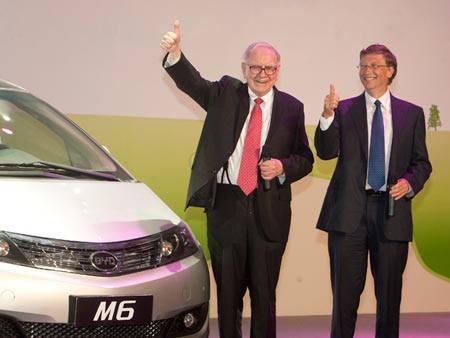 Chinese car maker BYD Co Ltd said on Tuesday that its net profit in 2011 fell by 44 percent from a year earlier due to fierce competition in the world’s largest auto market and a sharp fall in photovoltaic product prices.

That beat a market consensus forecast for 938 million yuan in a poll of 20 analysts by Thomson Reuters I/B/E/S.

“The difference is likely from one-off gains, which are not included in the forecasts,” said Rebecca Tang, an analyst at Standard Chartered Bank.

It is thought BYD might have booked a profit of 496 million yuan from the sale of a stake in Foshan Jin hui Hi-tech Photoelectric Material Co., a deal reported in November. But it did not disclose detailed accounts in the preliminary results.

BYD, which competes with Geely Automobile Holdings Ltd and Chery Automobile among others, said the earnings were based on internal audited accounts and might be different from final results still to be announced.

The homegrown auto maker has been undergoing a restructuring and cutting jobs to lift its efficiency and competitiveness.

BYD had been a shining star since receiving an investment of $230 million from Buffet in 2009. Its F3 sedan was China’s best-selling car in 2009 and 2010, but the company has been unable to build on its initial success.

An overexpansion and lack of competitive new models hit sales and profits in 2010 and 2011.

Its Hong Kong-listed shares lost more than half their value last year, after falling 40 percent in 2010, as investors were disappointed by its failure to deliver an electric car plan.

However, the stock has rebounded about 48 percent this year and closed Tuesday at HK$24.90, down about 2 percent.