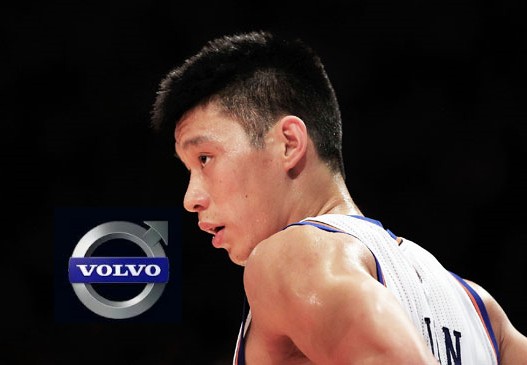 Jeremy Lin, the New York Knicks basketball player who surged in popularity this year, is in talks on an endorsement deal with Volvo Cars, three people familiar with the matter said.

The symbolism of such a deal would be rich. Volvo is now owned by China’s Zhejiang Geely Holding Group Corporation. The company is trying to boost Volvo sales in China as part of a strategy to double the brand’s global sales to 800,000 vehicles by 2020. Geely plans to invest up to $11 billion in the effort.

An agreement may be announced soon and would result in the 23-year-old former Harvard University player endorsing Volvo cars in China, two of the people said, asking not to be identified because the discussions are private. The two sides are in advanced negotiations after having reached a preliminary agreement, they said.

Resale prices of Knicks games and television ratings have surged after Lin came off the bench to lead his team to a seven- game winning streak last month. The point guard, who was cut twice by other teams, is the first Chinese- or Taiwanese American to play in the National Basketball Association and was on the cover of Sports Illustrated for two straight weeks.

For Lin, the talks may lead to one of his first endorsement contracts since his rise to fame last month. The only significant such deal he has is with Nike Inc. (NKE), signed when he entered the NBA in 2010 with the Golden State Warriors, Montgomery said in February.

The 6-foot-3 guard, who ignited a fan frenzy dubbed “Linsanity,” follows former Houston Rockets’ All-Star center Yao Ming in drawing Chinese interest in the NBA. The 7-foot-6- inch Yao, a Shanghai resident, signed sponsorship deals with companies including Apple Inc. and McDonald’s Corp before he retired last July. Sports Illustrated in June ranked him the fifth-highest paid non-U.S. athlete in the world, with an estimated annual income of $36 million.

Lin, who blogs in both mandarin and English on his Chinese Twitter-style weibo, has 2.47 million followers on his microblog.

Before signing with the Knicks in December, Lin appeared in 29 games — none as a starter — with Golden State, which released him. He signed and was cut by the Houston Rockets and played for the Dallas Mavericks on their 2010 summer league team.

Volvo is betting Lin’s popularity may help the company make further inroads in China, the carmaker’s fastest-growing market, as it seeks to double sales to 800,000 vehicles in the 10 years to 2020.

A group led by Zhejiang Geely bought Volvo from Ford Motor Co. for $1.8 billion in August 2010, completing the biggest overseas acquisition by a Chinese carmaker. Volvo, which makes the S40 sedan and XC90 sport-utility vehicle, sold 449,255 cars last year. The company is looking to form an auto manufacturing joint venture with Zhejiang Geely as part of initial plans to open two carmaking factories and an engine plant in China.