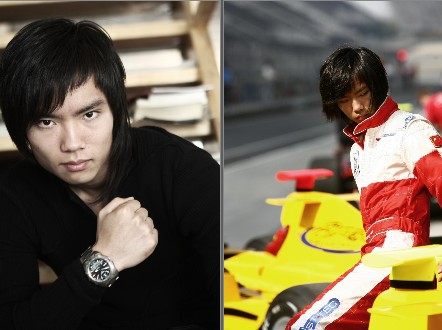 Ma Qinghua (m) set his sights on becoming the first Chinese driver to race in Formula One after being announced as a member of the HRT team’s “young driver development program” on Thursday.

In a deal timed to generate interest ahead of next week’s grand prix in Shanghai, Ma’s home city, struggling HRT held out the possibility of the 24-year-old testing its car later in the year.

“The formation program designed by HRT … includes professional assessment in his career as a driver, private tests with cars from different categories and simulator tests,” the Spanish-based team said in a statement.

“If the results of the partnership are satisfactory, Qinghua could take to the wheel of the F112 at the Formula One young driver test.”

HRT has struggled to compete since it arrived in the sport and, without testing its car before the season started, failed to qualify for this year’s opening race in Australia.

It is now in its third season in Formula One, still without a point and with the oldest driver lineup on the starting grid in Spaniard Pedro de la Rosa and Indian Narain Karthikeyan.

Spaniard Dani Clos, the team’s official test and reserve driver, is also in the development program.

While it could be some time before a Chinese driver competes for any of the leading teams, those at the slow end of the paddock have long offered a way in for drivers bringing sponsorship cash.

“I’m very honored to form a part of the driver development programme at HRT Formula One team since, with work and effort, it will allow me to become the first Chinese Formula One driver,” Ma said in a statement.

“It’s a very special moment for me and it’s hard to express how happy I am. I’ve dreamed of becoming a Formula One driver since I was very small.

“Now finally my childhood dream has become true,” he added. “Driving an F1 car will be the most incredible experience and I’m going to work hard to earn it.”

China has hosted a grand prix since 2004 but, with motor racing in its infancy there, has yet to provide a local for the fans to get behind despite an immense potential pool of talent.

Dutch-born Tung Ho-Pin was the first Chinese national to be involved in a Formula One team’s line-up when Renault, now Lotus, named him as an official reserve in 2010.

He also tested with Williams in 2003, after winning that year’s Asian Formula BMW series. Last year he became the first Chinese licensed driver to compete in the US Indycar series.

HRT said it wanted to serve as a platform to launch young talents like Qinghua into Formula One and had followed his progress when he was racing in Spain.

“I knew he had potential, but I was surprised with his speed, safety, adaptation capacity, attitude and professionalism,” team principal Luis Perez-Sala said.