Hyundai will make a stretched Elantra for the Chinese car market 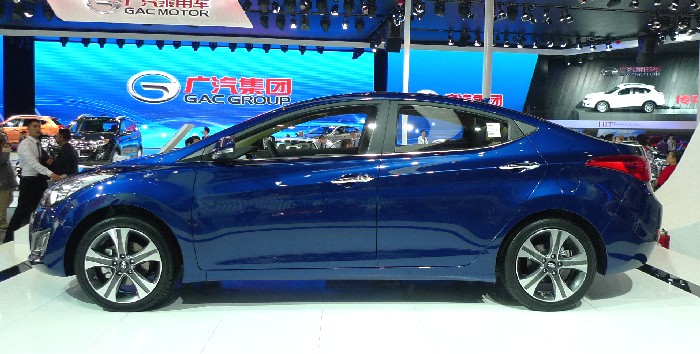 Hyundai as made steady progress in China in recent years by courting consumers on reliability and price. Now it’s betting that a new factory and an updated version of its top-selling model will give it the edge it needs to further boost sales of both small cars and more expensive — and more profitable — vehicles.

Hyundai this month will open the 6.5 billion yuan ($1 billion) Beijing plant, where it plans to produce Elantra sedans that are slightly longer and taller than the current model in a bow to the Chinese penchant for space and spice in cars.

The company expects the extra legroom and snazzier look to help it gain market share in China’s small-auto segment, where demand comes predominantly from people purchasing their first car. That, in turn, could help Hyundai as those buyers trade up.

“Chinese customers want even what we would consider a volume car to look as premium as possible,” said Frank Ahrens, Hyundai’s director of global public relations. “The Chinese taste is moving up the scale to larger and mid-size cars and we think we have that for them as well.”

The Seoul-based automaker, which made its first car in China a decade ago, has increased its share of the world’s biggest vehicle market to 6.1 percent from 3.9 percent in the past five years, according to auto association data. The new plant will boost Hyundai’s local production capacity by 67 percent, helping narrow its gap with industry leaders Volkswagen and GM.
Outpacing Industry

Hyundai is the fourth-best selling brand in China this year, behind Volkswagen, Nissan and Toyota, according to industry researcher LMC Automotive Ltd. General Motors Buick is number five and its Chevrolet is sixth. GM’s combined sales, including its Wuling minivan, make it the top-seller.

The company delivered 757,583 passenger vehicles in China last year, a 6.7 percent increase, outpacing the 5.2 percent rate for the industry, according to the company and the automakers’ association. Yet that growth lags behind GM, which sold 645,537 Buicks and 595,068 Chevrolets, up 17 percent and 9.4 percent respectively, GM reports.

The Langdong, as the new China-only version of the Hyundai Elantra is called, is 4 centimeters (1.6 inches) longer and 1 cm taller than the Elantra sold in other markets. Its hexagonal front grille was replaced with a chrome wing-shaped version to give it a higher-end appearance.
China Competition

Hyundai will face plenty of competition for the attention of Chinese buyers. Toyota expects to introduce a new compact model next year in China. Honda has said it plans to double deliveries in the country over four years and introduce more than 10 new and revamped models in 2013 to 2015. And Nissan’s Chinese venture says it plans to invest 50 billion yuan in the country by 2015.

The company’s first localized offering was the Elantra Yuedong, its best-selling model since its debut in 2008. The car was modified with a higher hood, bigger radiator grille and more dynamic headlamps to suit Chinese tastes.

Hyundai “put in effort to localize their products before competitors,” said Shin Chung Kwan, an analyst at KB Investment & Securities Co. in Seoul.

The Elantra, which has become a mainstay of the Beijing taxi fleet, has helped burnish Hyundai’s reputation for reliability. Last year, the company boosted the perception of its cars’ durability when it extended the warranty on engines and transmissions in China to as long as five years, or almost twice the average for other automakers, according to Autoforesight Shanghai Co., an industry research company.
‘Not Extravagant’

Beijing civil servant Li Yu said he chose the Elantra Yuedong over Nissan’s Sylphy because the Hyundai was cheaper, reliable and looks better than the price suggests.

“Raising a kid is expensive and we didn’t want to be extravagant with a car,” said Li, 32, who is saving for his four-year-old daughter’s college tuition. “The Elantra looks pretty cool and gives good value for money.”

The 1.6-liter Yuedong starts at 109,800 yuan, 25 percent less than the Sylphy and 15 percent lower than the Buick Excelle, according to pricing website cheshi.com. Hyundai’s 1.4- liter Verna, sold as the Accent in other markets, starts at 59,100 yuan. Both the Yuedong and Verna were among the top 10 best-selling models in China in April.

Now, Hyundai wants to move upmarket with more expensive models that offer higher profit margins. The company is aiming to increase Chinese sales of its premium Genesis sedans, which starts at 390,000 yuan, and the even more luxurious Equus.
Luxury Buyers

“We are aggressively marketing our luxury cars there,” said Hyundai’s Ahrens. “We are really trying to cultivate the Chinese luxury buyers because clearly that is a real market.”

A reputation for building cheap, small cars, though — even reliable ones — may work against Hyundai’s ambitions of selling more upscale models, cautions Shaun Rein, managing director of the China Market Research Group in Shanghai.

“I think they have a challenge,” said Rein. The small-car segment is ’’too price sensitive so it’s hard to get loyalty there.’’

So far, the company has lagged in sales of larger cars in China, delivering 546 Genesis sedans and 455 of the Equus last year. Audi, VW Group’s luxury nameplate, says it increased sales in China and Hong Kong by 37 percent to 313,000 vehicles last year, making the country Audi’s largest market. BMW says its China sales, including its Mini brand, rose 38 percent to 232,586 vehicles in 2011.
Lacking Capacity

In April, Beijing Hyundai’s president, Baek Hyo Heum, fretted that the company didn’t ’’have the capacity to compete.’’ The company is betting that the new factory in Beijing will supercharge its growth.

The new plant, Hyundai’s third in the country, will increase the company’s production capacity to 1 million vehicles a year, from 600,000 currently. The company also plans to make a revamped Santa Fe sport utility vehicle at the factory to cater to demand for the fastest-growing segment of the market.

The carmaker has produced more than 3 million vehicles locally since the first Sonata sedan rolled off the assembly line in 2002. In that time, China surpassed South Korea and the U.S. as its biggest market.

“Hyundai has been growing into a very competitive automaker in China,” said Dong Yang, secretary-general of the China Association of Automobile Manufacturers. “There are a lot of reasons you can attribute their success to but overall speaking, the product and market strategies they adopted were all right on.”