Guangzhou to limit license plates by Auction and Lottery 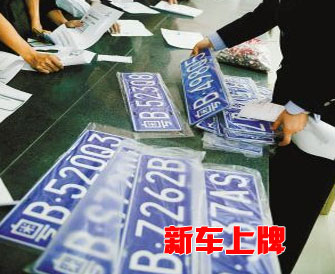 Guangzhou, which will limit car registrations starting this month, plans to introduce public auctions and a lottery to grant new car license plates in the following months.

Xian Weixiong, director of the Guangzhou commission of transport, said that a lottery embodies the principle of fairness, while public auctions can help those who really want to buy their cars get the license plates. “Funds raised from auctioning license plates will only be used to develop the city’s public transport system,” Xian said on Tuesday.

“In the coming months, we will auction off 5,000 car license plates and have a lottery for another 5,000 every month,” Xian said.

“The city’s relevant departments have learned from Beijing and Shanghai’s experience,” said Xian, who is also vice-chairman of the Guangzhou Committee of the Chinese People’s Political Consultative Conference.

Zheng Fenming, director of the Institute of Modernization Strategies under the Guangdong Academy of Social Sciences, said relevant departments should increase the number of car license plates granted via public auctions to increase the costs of owning a car.

“Those who are not rich enough should not be so eager to buy cars,” Zheng said.

He added that limiting car registrations can only partly help the city tackle its traffic problems.

“In the long run, the authorities should make greater efforts to further improve the city’s traffic facilities and raise management skills to ease the city’s heavy traffic jams,” he said.

Zheng urged the city to collect more congestion fees and further increase parking fees in busy areas to help reduce the number of vehicles on its roads.

“Also, the number of government and company cars should be reduced, while public buses and cabs should be increased to decongest Guangzhou’s clogged roads,” Zheng said.

Meanwhile, more large-scale parking places should be built in suburban areas for vehicles from outside the city, he added.

But Han Zhipeng, a member of the Guangzhou Committee of the Chinese People’s Political and Consultative Conference, said he opposes increasing the number of car plates for public auctions.

“Why should the rich, or those who really want to buy their cars, have to pay more to be granted car license plates via auctions?” he said.

Han said he is in favor of limiting car purchases to help decongest traffic on roads in Guangzhou, which saw an annual growth of 19 percent in the number of vehicles registered in the last five years.

“More than 1,000 cars used to be registered every day in Guangzhou before July,” he said. Han said that limiting car registrations is an effective way to ease traffic jams.

Meanwhile, Xian said the vehicle registration limits were in response to the rapid growth in the number of cars in recent years. Heavy traffic is hampering the economy’s growth, worsened air pollution and antagonized many local drivers and residents.

Congested traffic has reduced the average driving speed to less than 20 kilometers per hour on more than 27 percent of the major roads and streets.

Xian said Guangzhou also plans to prioritize “green” public transportation systems by increasing the number of buses and further improving subway services in the coming months. He added that his commission will open new bus routes and increase the number of buses to better serve local residents and tourists.

According to data from the local traffic police, Guangzhou – which has a population of more than 16 million – had more than 2.4 million vehicles registered by the end of May. An average of 3.3 cars have to compete for or share a parking place due to a shortage of parking places.