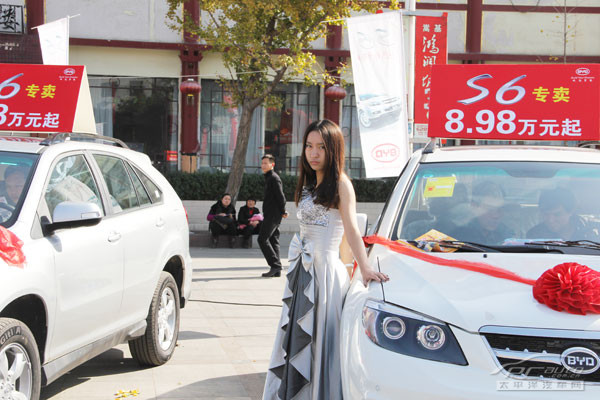 The Chinese battery and automaker BYD Ltd remains cautious about its third-quarter outlook and has forecast a steep profit fall of as much as 95 percent for the first three quarters after having significantly underperformed most of its peers in the first half, dragged down by its solar-cell and handset units.

Net income for the nine months to end of September is forecast to fall by as much as 95 percent to 17.6 million yuan ($2.77 million), BYD said in a statement to the Hong Kong stock exchange, after its first-half profit plunged 94 percent to 16.3 million yuan from more than 275.4 million yuan a year ago.

China’s automobile industry demand is expected to remain weak with more intense market competition in the third quarter, driven by the uncertainties in the macroeconomic landscape at home and abroad, said the statement.

“Car sales are always slack in July and August, so we are not expecting high profits during the period,” BYD Chairman Wang Chuanfu said.

“With the launch of new automobiles, sales are expected to pick up again in the traditional peak season during the fourth quarter,” Wang told reporters in Hong Kong on Tuesday.

During the first six months, BYD sold a total of 199,700 vehicles, down 9 percent over the same period last year.

However, revenue generated from car sales rose 12.4 percent to 10.7 billion yuan. Wang explained that BYD has shifted the group’s products mix to the middle- to high-end markets, which reported higher income with a lower sales volume.

But the carmaker that used to own the country’s best selling model F3 sedan has been outstripped by its peers in the Chinese market, despite only a total 9.6 million vehicles being sold in China in the first half, representing a 14-year low of 2.9 percent year-on-year expansion, according to the China Association of Automobile Manufacturers.

Great Wall Motor Co on Friday said its first-half net profit rose 29.9 percent to 2.4 billion yuan from 1.8 billion yuan a year earlier after selling an aggregated 262,018 vehicles during the period.

Geely Automobile Holdings Ltd, another Hong Kong-listed carmaker, reported last week that its first-half net profit rose 8.7 percent this year, following sales of a total of 222,390 units both at home and abroad, up about 4 percent from a year earlier.

Indicating a “neutral” view on its business, a Hong Kong-based analyst from CCB International Securities said BYD’s lackluster result is within market expectation, which, also reflected on the stock price after the company’s announcement of its dismal first-quarter result.

BYD’s share price closed at HK$13.40 ($1.73), rising HK$0.04 or 0.3 percent on its Hong Kong trading on Tuesday – the subsequent trading day after it announced the result, which outperformed the 0.07 percent gain of the city’s benchmark Hang Seng Index.

“BYD’s automobile sales were de facto stable. The handset business was acceptable. If its solar-cell unit could make less losses in the following period, we could even expect the company to turn around next year,” the analyst told China Daily.

After registering a loss of nearly 600 million yuan in the solar-cell business in the first half, BYD Chairman Wang said on Tuesday that the losses in the second half will narrow, but the unit is expected to be continually affected by excess capacity and increasing inventory levels in the market. But BYD is not considering withdrawal from the business, Wang added.