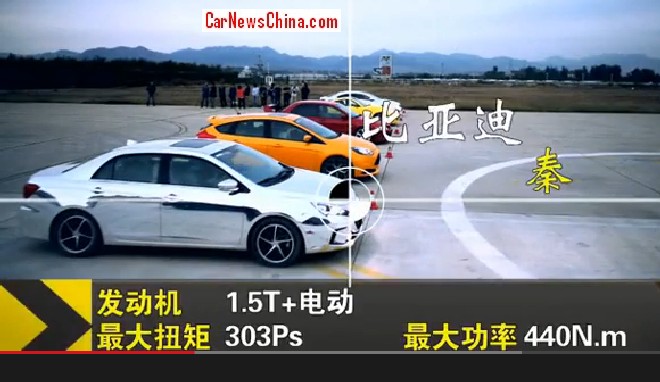 A great video showing the new BYD Qin hyrbid super car drag racing eight other speedy cars. The BYD Qin is the most powerful mass market hybrid in the world, with a combined output of 303hp and 440nm. But can it beat the petrol-powered competition? They are:

The Qin is powered by a hybrid drivetrain consisting of a 1.5 liter turbo four cylinder petrol engine and an electric motor. The 1.5 turbo poops out 154hp and 240nm, the electric motor 149hp and 200nm. Gearbox is a new BYD-developed 6-speed DCT.

The shiny silver Bling BYD Qing stands in the middle of the pack, ready to hybrid them all. Here we go.

Bet you didn’t expect that… The BYD clearly needs something even faster for a serious match. Next up, a LaFerrari?

Via: YouTube, and many thanks to reader Lawrence R. for the tip!