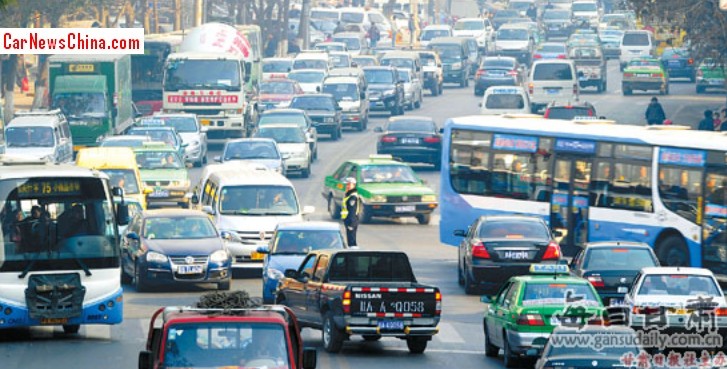 The crusade against cars in Chinese cities continues in an ever faster pace. The newest battle is in the city of Lanzhou, capital of Gansu Province, where local authorities have implemented a strict odd-even license plate restriction system. The measure was launched on Sunday after the city pollution levels exceeded 101 on the official air quality index for three consecutive days last week. Levels above 101 are considered unhealthy.

The restrictions will remain in place until Jan 10, authorities in the Gansu provincial capital said. Under the measure, vehicles whose license plates end in odd or even numbers will be allowed on the road on alternating days — half of the cars will be barred on any particular day.

The model is similar to one used by Beijing to clean the air ahead of the 2008 Olympic Games, and it has been an idea considered in several major cities. Beijing and Guangzhou, which are also troubled by air pollution, have recently announced plans to implement the odd-and-even restrictions on heavily polluted days.

Lanzhou, located in a valley and surrounded by mountains, and with its developed heavy industry, is among the most polluted cities in China. Its environmental protection bureau said that weather conditions for the next five to seven days would not help disperse pollutants, a factor behind the decision to restrict cars.

To cope with the lingering dust, Lanzhou has already suspended work at all construction sites and increased the frequency of road cleaning and washing, the bureau said.

Chai Fahe, vice-president of the Chinese Research Academy of Environmental Sciences, said cities are increasingly imposing car restrictions to curb pollution, yet most were only restricted to a fixed time period. “Lanzhou has made remarkable progress in curbing air pollution, and the decision was made to consolidate the progress it had made.”

In 2011, Lanzhou ranked as the worst Chinese city in the World Health Organization’s survey tracking air pollution by the levels of airborne particles smaller than 10 micrometers in 1,086 cities across the world.

Lanzhou later dropped off the list of the top 10 most polluted cities in China through stiff anti-pollution measures, Chai said.

Car restrictions in Lanzhou were the strictest among cities that have carried out similar plans.The Lanzhou Public Transport Group, which runs the city’s public transportation system, said it will increase bus services.

Under a contingency plan for air pollution in Beijing, authorities could implement the odd-even car restrictions and suspend 30 percent of public vehicles if meteorological authorities forecast three consecutive days of severe pollution.