No Sat Nav in the Tesla Model S in China 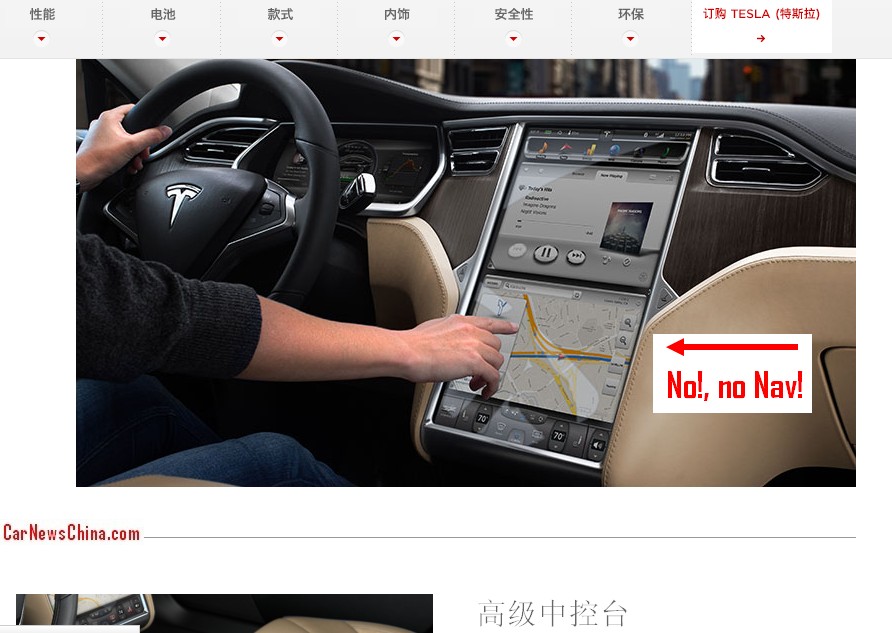 Another major setback for Tesla in China: the Tesla Model S comes without satellite navigation, even though Tesla’s Chinese website indicates otherwise. The Tesla satnav only works with Google Maps and Google Maps is permanently blocked in China.

Techblog ChinaEV asked Tesla about this and got the following answer:

Currently there isn’t a navigation system in Chinese Model S as Google maps are not supported in the country. However, teams are currently working on a solution with Chinese text and voice recognition. We plan to introduce navigation to Chinese cars later this year (as already communicated to our customers). Once it’s available, maps will be pushed to customers’ vehicles through software updates.

Tesla, apparently afraid of irking the Chinese government, politely uses the phrase ‘not supported’, instead of ‘blocked’. Google Maps has been totally blocked for at least half a year now and before that it was on and off, sometimes running smoothly and sometimes not at all.

The Google Maps block is well known and it seems unlikely that Tesla didn’t know about this before it entered the Chinese market. The blockage is part of a long standing feud between Google and China, starting with Google refusing to alter its search results for the Chinese sensor. Other companies, such as Microsoft, comply with the sensor.

Tesla says it is working on a solution. There are many Chinese-made alternatives available, all of which are working well. Or Tesla could stay with fellow Americans and make a deal with Bing, which is running fine in China but doesn’t have a Chinese-language interface yet.

Before that is all done Tesla buyers in China will have to do with a third-party sat-nav system, a hard sell in a 100.000  dollar car.