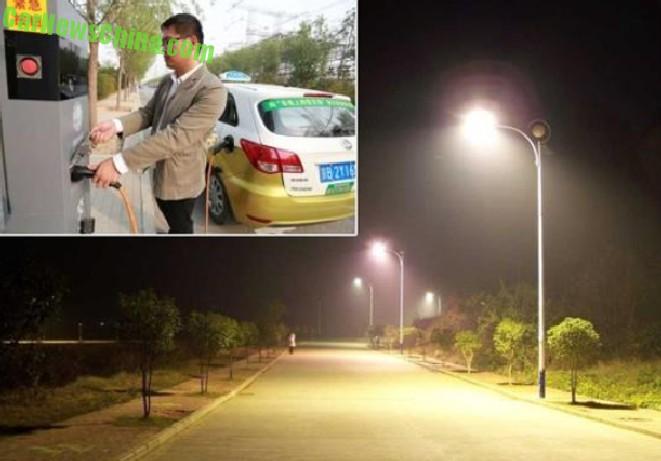 The biggest hurdle facing electric cars in China is the lack of charging stations on public roads. The government is aware of the problem and is looking for creative solutions, like using street poles. Beijing has launched a pilot project to transform street lamps to serve as charging poles for electric cars.

Eighty-eight high-pressure sodium lamps on a road in Beijing’s Changping District have been converted into energy-saving LED lamps. Eight charging poles have been installed and put into trial operation using the energy saved from the new LED lamps, said the Beijing Municipal Science and Technology Commission.

The charging poles work day and night, alleviating charging demand for electric taxis and private cars in the area, said the commission.

Beijing will expand the project to other areas.

The city plans to build 10,000 public charging poles for electric cars by 2017, the municipal government said in June of last year.

The Chinese government has been encouraging consumers to buy electric vehicles as a solution to the country’s pollution problems. But the plan has been hindered by a bottleneck in the charging infrastructure.

A charging system for the Beijing-Shanghai expressway will soon open. Over the weekend, five electric cars started a 1,262-km test journey from east China’s business hub of Shanghai to Beijing, with charging stations available every 50 km in each direction.

Measures including tax exemptions, price subsidies and requirements for government organs to buy green cars are in place. However, new energy cars still account for only a tiny proportion of total output. In the first 11 months of 2014, China’s automotive industry produced 21.1 million vehicles.