This is the BYD Tang Ultimate Edition super SUV for China 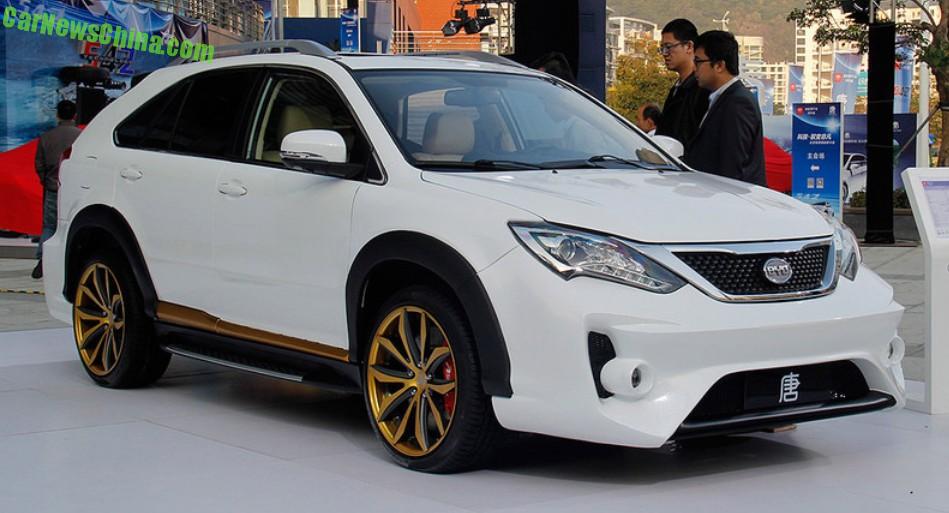 Time now for a closer look at the BYD Tang Ultimate Edition, the super speedy and hyper exclusive variant of the new BYD Tang SUV. The Tang Ultimate Edition is limited to 200 cars and costs 600.000 yuan (96.530 USD), but price goes down to 520.000 yuan (83.711 USD) when all green-car subsidies are included. Still a lot of money, especially since the base Tang starts at 220.000 yuan. So what do you get for all that extra cash? More power!, and then some.

This is the standard BYD Tang, well almost, as this is the ‘Tang Limited’ launch edition with gold-painted (standard) alloys.

Gearbox is the same 6HDT45′ six-speed DCT, developed by BYD.

BYD has not released any numbers on top speed, although some report say the top speed is electrically limited to 180 kilometers per hour on both the Tang and the Tang Ultimate. If true, that would be a huge disappointment. 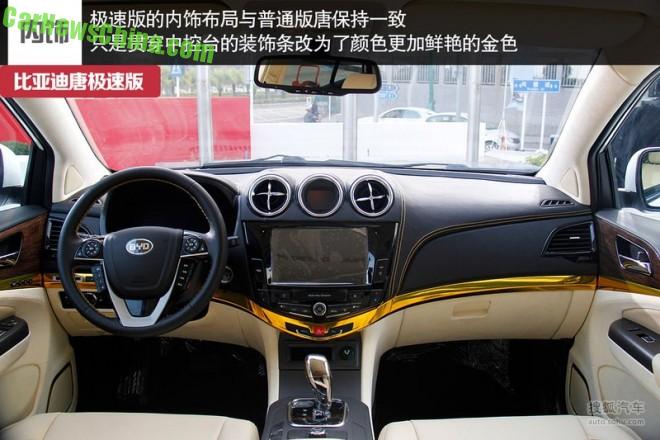 The Tang Ultimate comes with a gold painted strip over the dashboard and leather everywhere.  Otherwise the  same as the base Tang. 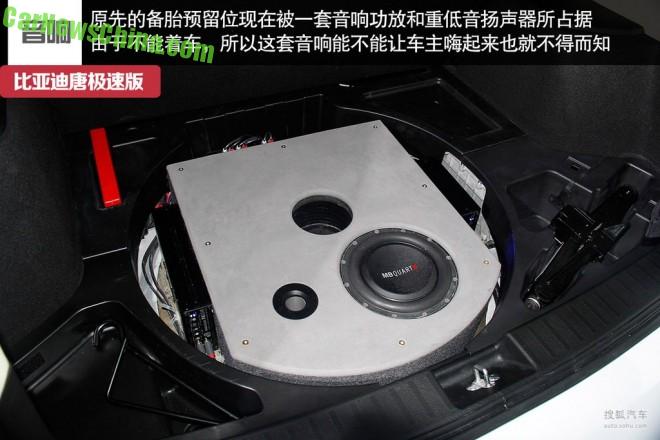 The Ultimate goes without a spare wheel. It has been replaced with an extra powerful MBquart subwoofer. Risky, and the set-up doesn’t look very solid.

Extra wings and vents up front and on the back, all made out of carbon fiber. Golden strip over the doors. Tires are Pirelli P Zero, fitted with racy ten-spoke alloys and red brakes. Large window wing in black. All good, but there are two odds. 1. the side bars are the same as on the regular Tang, and they look very out of place, aerodynamic as a brick as they are. 2. the roof rails were not removed. Usually we are great fan of roof rails on SUV’s, but they don’t really go with a super SUV designed for pure speed and performance. 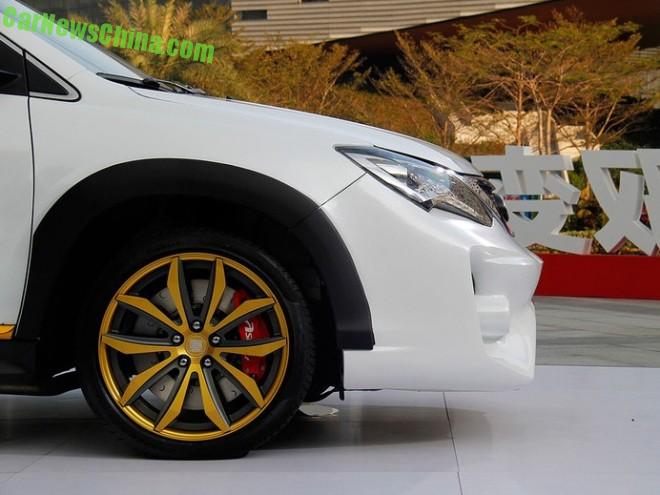 Interestingly, the size of the tires (245/40 R20), is the same as on the regular Tang. Chinese media say the design of the platform and suspension do not allow for larger tires. The tires look too small on the regular Tang and they look far too small here. Red brake is very good. 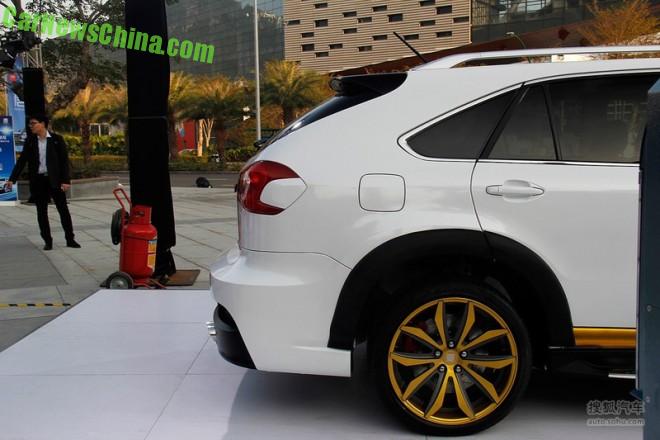 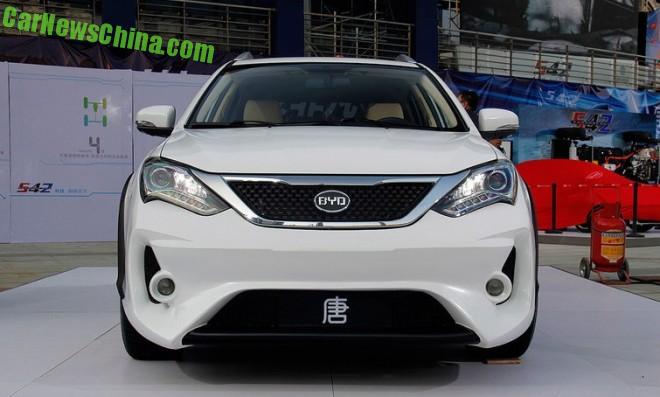 The front changed the most with a completely new bumper with a low black lip topped by a gaping black how, and flanked by mean looking fog lights, which are flanked by a set of extra air intakes. 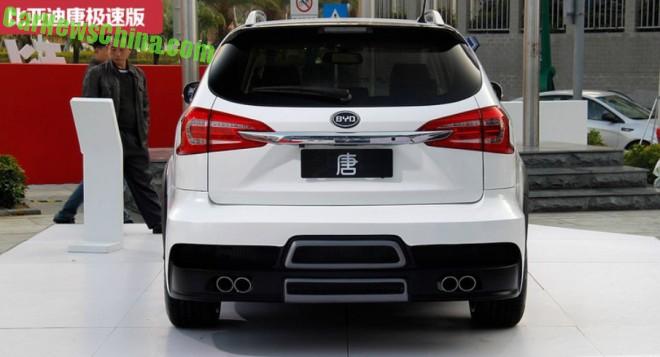 Four exhaust pipes and two air vents in the center of the bumper.

All carbon fiber there. 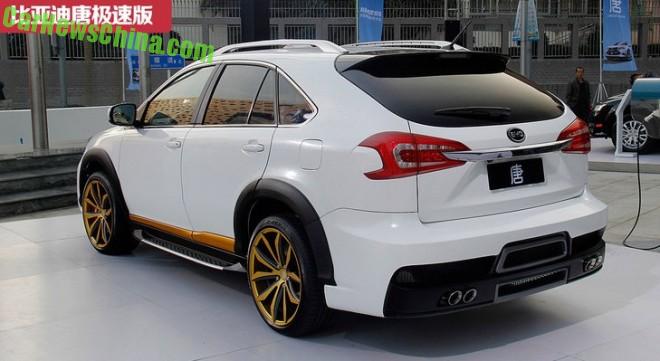 Screaming speed she does! So is the BYD Tang Ultimate worth the money? We think she is.

The Ultimate has more power than any other SUV in the world, it is limited and thus exclusive, it comes with lots of high-tech, it is powered by an innovative drive train, and it is completely mad. May there be more!