Geely and Volvo to share Platform for new SUV, hatchback 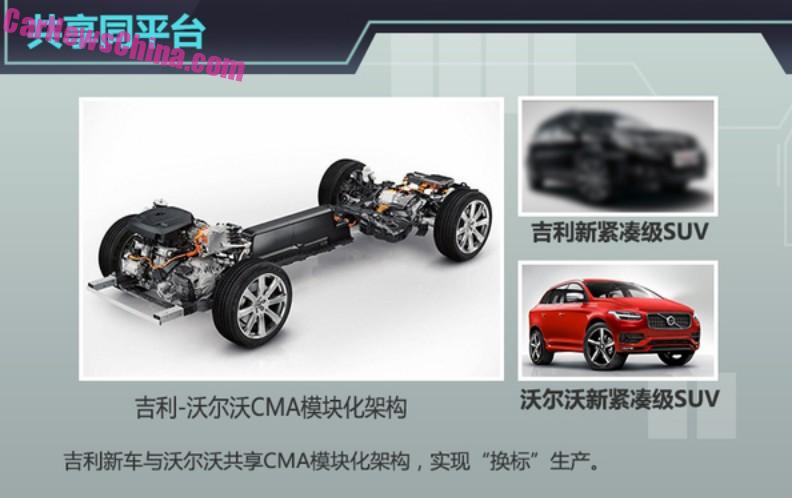 Chinese media report that Geely and Volvo will share a new modular platform that will underpin a new SUV and a new hatchback, among other cars. The platform has been developed by Volvo and is called ‘CMA’. It will underpin a new Geely SUV code named ‘NL-4’ and the new Volvo XC40 SUV that will compete with the Audi Q3 and Mercedes-Benz GLA.

The SUV’s however will not be the first cars to use the CMA platform. That honor goes to the all-new Geely Cross hatchback, which will be launched on the Chinese car market at year’s end. There is no Volvo variant of the Cross in the cards at the moment, but that could change in the future.

The SUV’s will be manufactured in a new factory in the city of Zhangjiakou in Hebei Province. They, and the Geely Cross, will be powered by a new 1.5 liter turbocharged engine which has been developed by Volvo. The engine will deliver anywhere between 150 and 180hp, depending on specification. The engine will be made in-house at the Zhangjiakou plant.

The plant will also produce other Volvo-designed engines, including a 2.0 turbo and… the good old 2.5 liter five-cylinder. The latter is a surprise because Volvo is phasing it out. It is however still used in China for the China-made Volvo XC90 Classic, and it seems reasonable to assume it will be used to power Geely-branded cars in the future, likely larger SUV’s such as the Emgrand GX9.

Further in the future Geely will also use the CMA platform for a new sedan (code named CS11) and a compact crossover SUV.