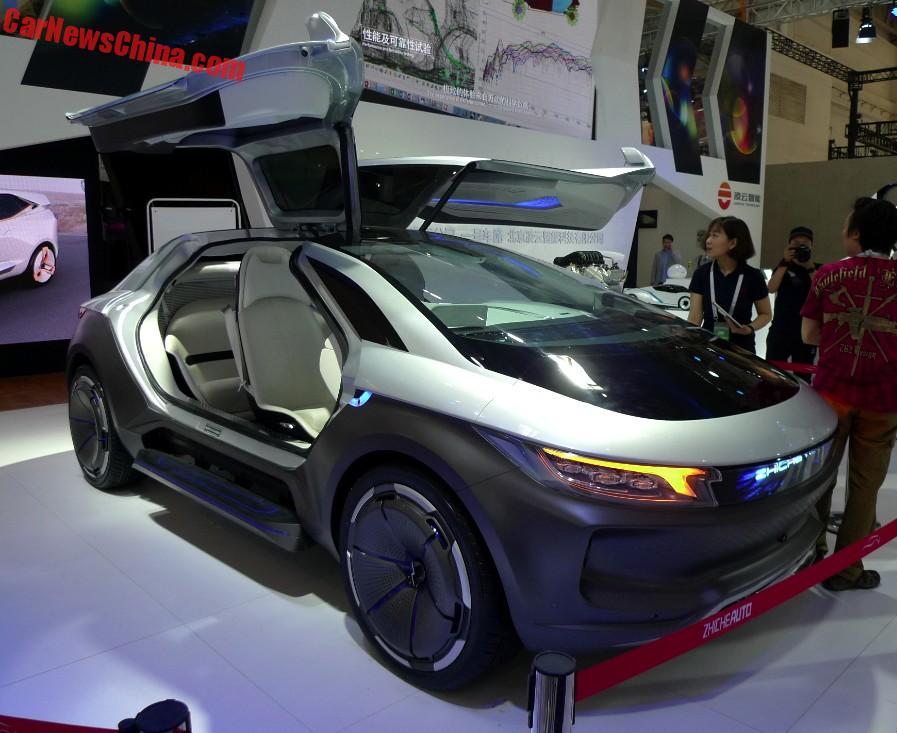 Zhiche Auto brought one of their new electric SUV’s to the Beijing Auto Show, so we could have a good look at it. The vehicle, it doesn’t really have a name yet, stood on the stand of design firm IAT, the same company that gave it the Karlmann King. The Ziche, as I will call from now, looked remarkable solid for a concept car, and everything worked.

Gull wing doors naturally, all Chinese electric car makers are following the Model X’ example, but they go for full-width doors instead of just for the rears. The company says it wants to launch the Zhiche on the Chinese car market next year for about 200.000 yuan or $30.000, clearly aimed at the Tesla Model 3.

Zhiche Auto was founded in 2014 and is based in Beijing, it focuses on the development of new energy vehicles (NEV’s), smart-car connected systems, and cloud computing systems. It is headed by CEO Shen Haiyin, formerly president of Chinese e-commerce website 360.com, and before that vice president of software company Kingsoft.

Zhiche Auto it is all about ‘interconnected car’ and ‘connected cars’, which in short means vehicles can connect with each other and with the wider world, which includes home and office. The car’s computers for example will be able to order the house computers to start up the heating system when the navigation system knows the vehicle is heading home. The Zhiche will also have various autonomous drive systems.

Zhiche Auto cooperates with the Japanese engineering company GLM, which was closely involved in the development of the speedy Tommy Kaira ZZ electric race car. GLM will supply the platform and drive train for the Zhiche. In return, Zhiche Auto will supply GLM with its connectivity software. There are no specifications of the motor available yet.

The company lists (scroll down) a whole herd of companies it says it is also cooperating with, including Sharp, BorgWarner, Desay, Toshiba, Texas Instruments, and Gemalto.

The Zhiche was designed by Chinese designer Du Baonan, who previously was chief designer at PSA China, where he penned the Citroen C4L, among others. 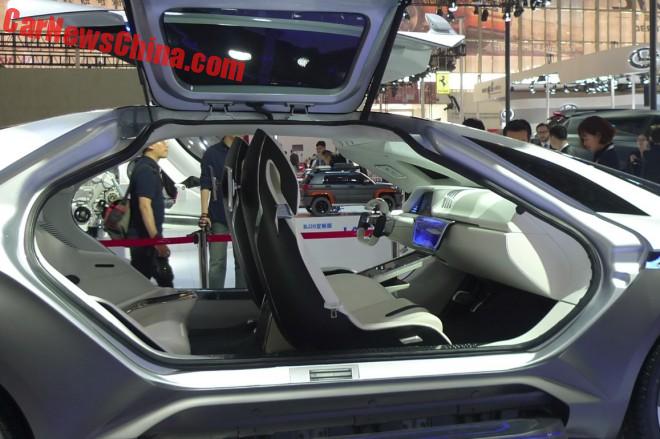 The interior looks great with individual seats in the back, loads of cream white leather, and a futuristic dashboard. 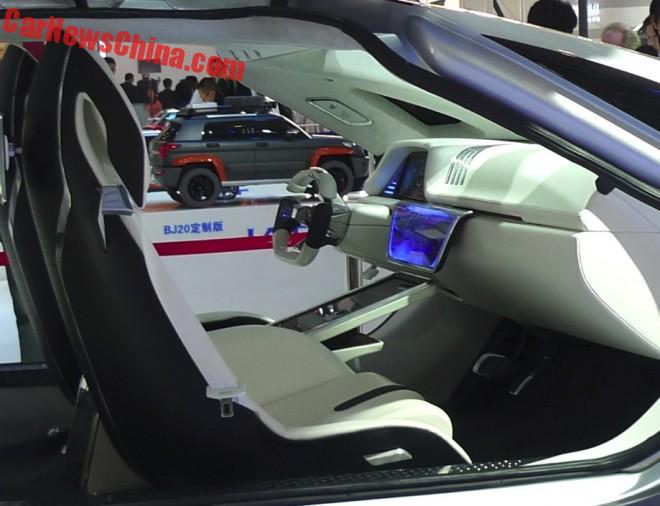 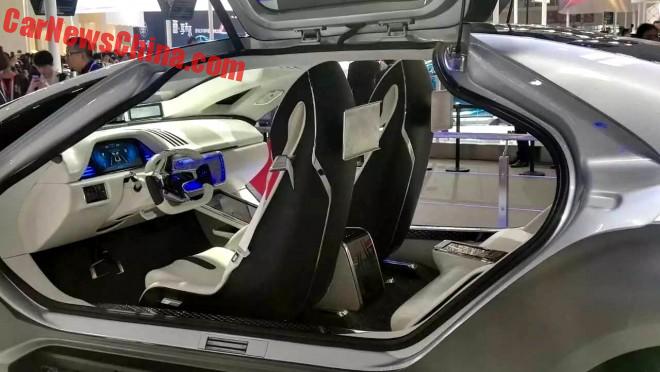 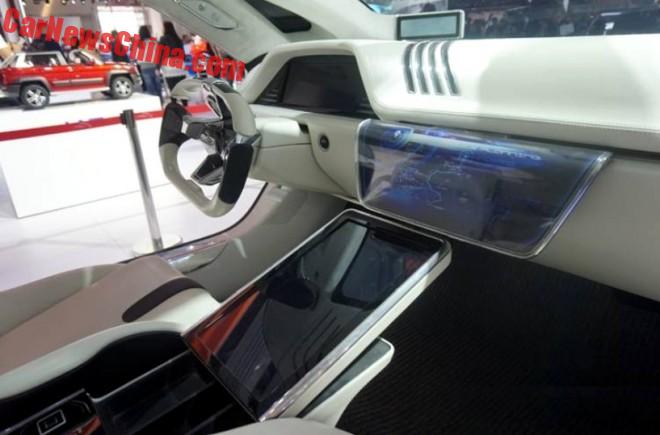 The systems switched off. That touch pad is truly gigantic, about twice the size of the screen in the Tesla. But is also was the only screen that didn’t work. It looks like the screen can be pushed back to the area between the seats, but why that would be useful is a mystery. 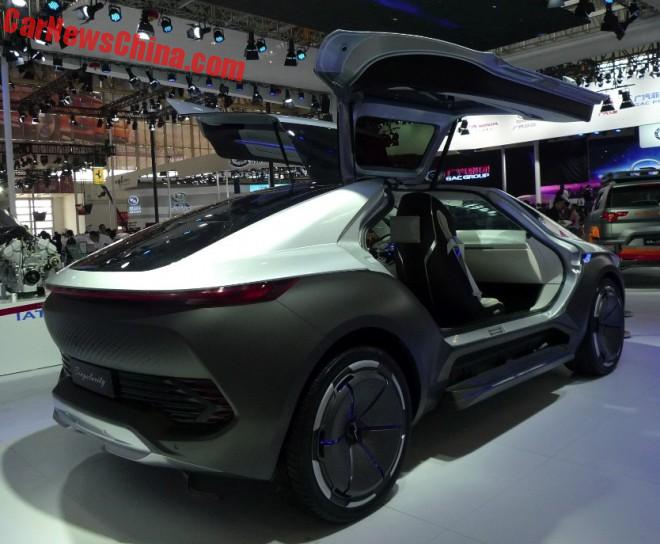 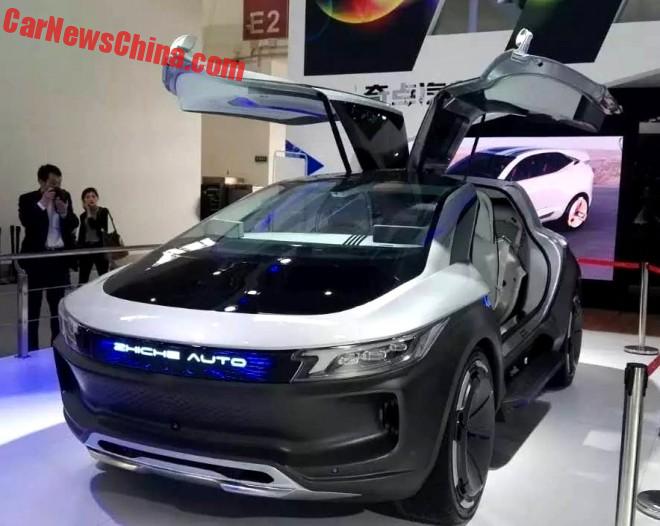 The LCD in the grille can talk. Here it says its name, and it can also say hello.