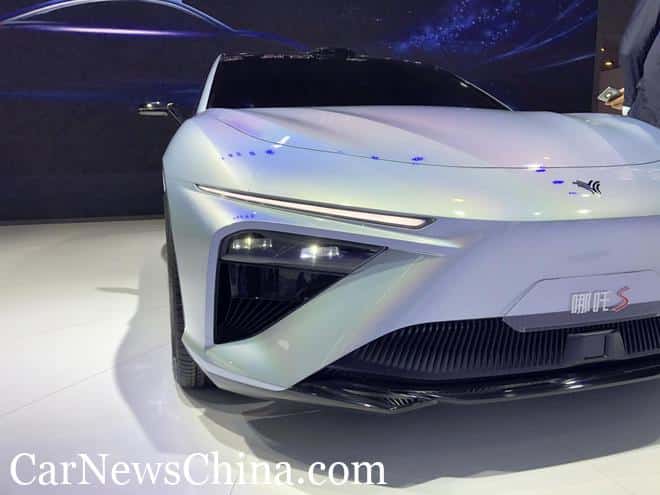 Want a good-looking, sporty electric sedan? Hozon has you covered with the Neta S.

First unveiled at the 2021 Shanghai auto show, many shrugged off the concept as just another concept; happily, spy shots of the production car tell a different story. Apart from more realistic wing mirrors (likely due to regulations) and a honeycomb intake, the production car closely resembles the latest concept- how often does that happen?

Featuring split headlights, retractable door handles, and a rear light bar, there’s no mistaking what era this car is from; despite the common elements, it all comes together well without being offensive. I only see a little bit of Lynk & Co in the rear light bar, but maybe that’s just me. No interior shots are currently available, but here’s a guess- lots of screens!

Targeting an end-of-2022 release, the Neta S is a four-door fastback sedan with aggressive yet fluid (0.23 Cd) proportions. Measuring 4,808×1,840 1,530mm and a wheelbase of 2,768mm, the dimensions are close to the similarly-styled XPeng P7, though the wheelbase is quite a bit shorter.

Available in range-extender EV or pure EV form, NETA claims a best-in-class 1,100 km and 800 km range, respectively. Reaching 100km/h (62 mph) from a standstill in 3.9 seconds, the Neta S is no slouch either; it even passes the moose test at a respectable 80km/h (roughly 50 mph)! Meanwhile, the Tesla Model 3 passes at 83km/h, just 3km/h more.

Developed with Huawei, the NETA S can be equipped with 2x Lidars, 5x millimeter-wave radars, 12x ultrasonic sensors, 13 cameras, and a wide range of positioning tech. Supposedly, the tech onboard will allow for L4 autonomous driving, we’ll have to see what NETA’s legal team thinks about that.

Are you as excited about the NETA S as we are? Stay tuned to CarNewsChina.com for more information!