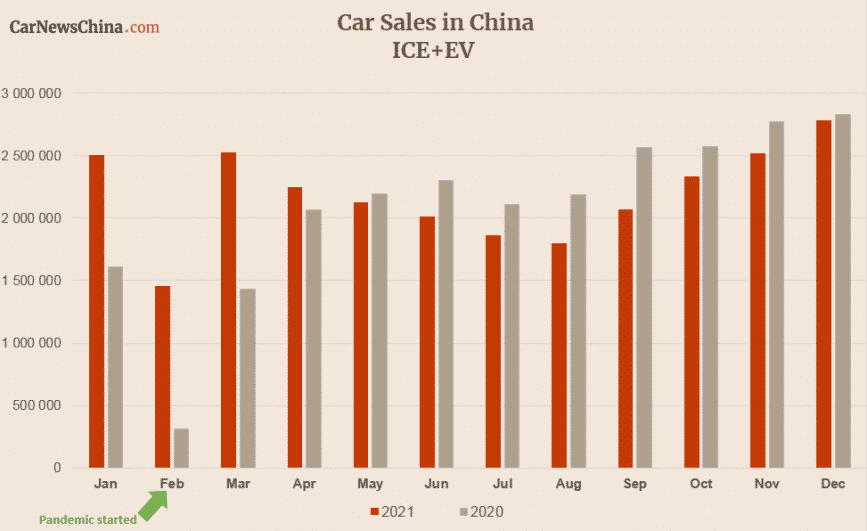 Despite an industry-wide chip supply shortfall and rising raw material prices, China’s new automotive production and sales increased in 2021, reversing a three-year downward trend, according to the China Association of Automobile Manufacturers.

With total yearly sales exceeding 3.5 million units and a market share of 13.4 percent, the new energy vehicle category (NEV), which includes battery-electric cars, plug-in hybrid electric vehicles, and fuel cell vehicles was the shining point. According to the organization, the segment has shifted from policy-driven to market-driven.

Last year, the country’s car exports performed exceptionally well due to the revival of global markets and the improved competitiveness of Chinese vehicle brands. For the first time in 2021, yearly export volume topped 2 million units, with monthly performance reaching new highs for many months in a row. Chinese automakers had a market share of 44 percent, which was close to the highest ever.

According to the organization, vehicle production and sales in the world’s largest car market are expected to be higher in 2022 than in 2021.

China’s new car sales increased 10.5 percent month-on-month to 2.786 million vehicles in the last month of 2021 but declined 1.6 percent year on year, 7.5 percentage points lower than the previous month. The year-over-year change rate of monthly production outcomes, on the other hand, increased.

China manufactured 26.082 million automobiles in 2021, up 3.4 percent year on year, while the market sold 26.275 million vehicles, up 3.8 percent from the previous year. Vehicle sales increased significantly in the first quarter of last year. However, a chip shortage severely hampered the third quarter’s earnings.

The PV market continued to sell more than 20 million vehicles every year. PV sales in the market climbed 6.5 percent year over year to 21.482 million units, while manufacturing output increased 7.1 percent to 21.408 million units. China’s yearly PV sales broke 20 million for seven years in a row by 2021.

Due to the consumption upgrading in the country, the premium passenger car class completed the year with sales volume climbing 20.7 percent year on year to 3.472 million units. The segment’s annual volume amounted to 16.2% of the market’s yearly total PV sales, up 1.9 percentage points from the previous year.

PV sales from Chinese brands grew 10% year over year to 1.137 million units last year, giving them a market share of 46.9%, up 3.4 percentage points from the same month the previous year. Chinese brands had a 44.4 percent market share in the PV category for the whole year, up 6% points of the prior year.

Annual NEV sales in China soared 157.5 percent to 3.521 million units in 2021, setting a new high. Throughout the previous year, the NEV category had witnessed significant development. The market’s monthly NEV sales hit 200,000 units in March and 300,000 units in August. The volume increased to 531,000 units in the final month of last year.

In terms of market share, the NEV category accounted for 13.4 percent of the total market, increasing eight percentage points over the previous year. The segment’s market scope and development quality have greatly improved according to the organization.

China had never exported more than 2 million automobiles in a single year before. According to the association’s study, China’s new car export volume more than doubled to 2.015 million units, accounting for 7.7% of the country’s total yearly sales, up 3.7 percentage points from the previous year.