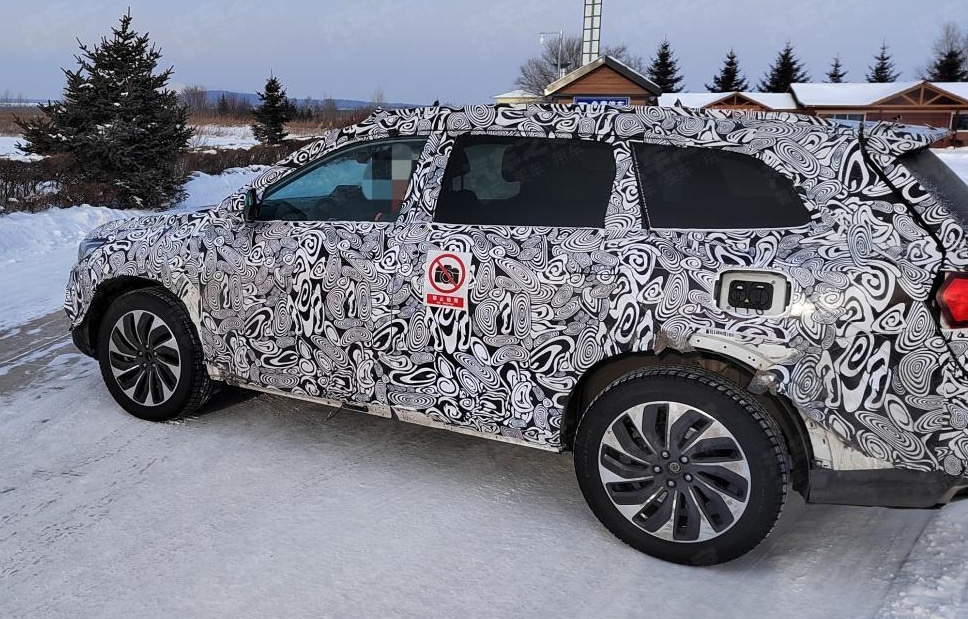 New spy shots appearing to show a larger AITO SUV, expected to be called the M7, have surfaced on Chinese social media.

The images show the car undergoing cold-weather testing at an unconfirmed location decked out in spiral camouflage and an ominous sticker requesting people don’t take photos.

Fortunately, no attention was paid, and the shots give a clear indication of the car’s heritage. While the alloys from the M5 are a dead giveaway, the most obvious indicators that it’s an AITO are inside.

As with the M5, the cockpit is a fairly nondescript place to be, with simple straight lines on the dash and doors. However, the huge central screen, twin 40W wireless charging pads, and Huawei Sound speakers in the doors mark this out as an AITO.

Not much to see here

The exterior shots give very little away. Other than that, the expected M7 will keep things low-key. The upturned trapezoidal grille from the M5 can just about be seen behind a longer nose, while the headlight units extend further into the wings.

The disguise effectively conceals any sculpting along the side save for a rectangular element at the base of the doors. Towards the rear, a large window after the C-pillar and a squared-off roof indicate the car will likely feature three rows of seating.

At the rear, the M7 adopts a clamshell-style boot lid that looks similar to that on an Audi Q5. The obligatory lightbar also makes an appearance, as do horizontal taillights.

A missing charging port cover appears to show twin charging sockets for both low and high-speed charging, and with the M5 based on Seres’ EREV platform, it’s most likely the M7 would follow suit as a range-extender.

Top-level versions of the AITO M5 come in at over 300,000 RMB so expect a price premium here. This would see the M7 pitched against Voyah’s FREE and the Li Auto ONE, particularly with that third-row seating.

Going off the M5, we can expect any range-extender M7 to feature a 1.5-litre four-cylinder engine connected directly to the battery. Capacity would likely remain at 40kWh, similar to the Li ONE and larger than that in the FREE. Expect the pure-electric range to be around 150km.

The full range for the M5 is a highly impressive 1195km, beating all rivals, so anything in that vicinity on the M7 would be a solid form for what will be a bigger car.

As seen in the images, we can expect the M7 to also include a plethora of Huawei tech, including the 15.6-inch screen from the M5, complete with Huawei Harmony OS. L2+ autonomous driving features should also be on the cards, as well as over-the-air updates.

Judging by the interior shots, the impressive 19-speaker Huawei Sound audio system, with 7.1 channel surround function, built-in headrest speakers, and a total output of 1000W, should also make it into the M7.

AITO is a joint venture between car maker Seres and technology giant Huawei and stands for ‘Adding Intelligence to Auto’.

Seres build the cars, while Huawei adds the technology or the ‘brains’ of the vehicle. Huawei sells the vehicles in their stores alongside their mobile phones and other products.

The first fruit of the partnership was the SF5, but poor sales figures drove AITO back to the drawing board, and the M5 emerged soon after as a significantly more premium successor.