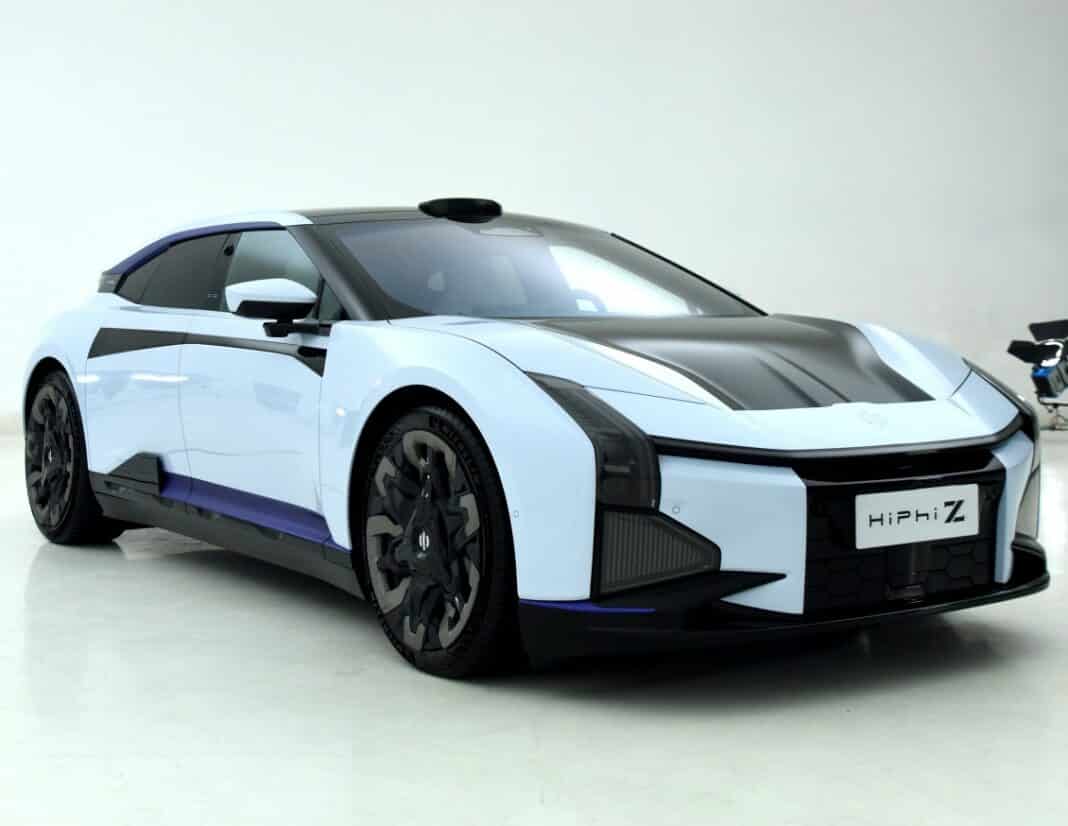 This is the final production version of the new HiPhi Z, a futuristic electric sedan from China that looks more like a space ship than as a car. Still, it is very real and the pre-sale order books are open, with price ranging from 600.000 to 800.000 yuan (89.500 – 119.400 USD). The exact pricing will be announced later this month. HiPhi is a brand under Human Horizons Technologies. In 2021, the company launched its first car; the equally outrageous HiPhi X CUV.

The HiPhi Z is a low slung sedan with over-sized 22-inch wheels and suicide rear doors. It has completely original looks, there is just nothing that looks similar. The X has proven to be quite a popular high-end vehicle, exactly because it is so different. The Z will likely become another hit for HiPhi; there is a lot of buzz around this car, with unconfirmed reports saying some 2500 units have been ordered already.

The doors open automatically when the driver approaches the vehicle. The HiPhi Z has the same power train as the X. There are two options: 1. single motor, rear-wheel drive. Output is 300 hp and 410 Nm. 2. dual motor, four-wheel drive. Output is 600 hp and 820 Nm. With the dual-motor setup, the Z goes from 0-100 in just 3.8 seconds. The Z gets a larger battery than the X: a 120 kWh unit good for a range of 705 kilometers NEDC.

Design is brilliant seen from the rear, with wide wheel arches, spoiler that floats above the bootlid, a full-width LED light unit, and a strangely simple black bumper. The HiPhi Z gets rear wheels that can steer or counter steer up to 13.2 degrees. The Z is equipped with a (semi-)autonomous driving system that consists of smart software, 34 sensors and the necessary radar systems.

Even the badge is cool!

It may look like a lift-back but the Z has a traditional sedan-style boot lid.

The rear looks impressive by daylight, but wait until you see it at night:

A LED light bar, lightened HiPhi lettering in the middle, and another set of LED lights on the sides.

The interior is as mad as the exterior. There is no instrument panel but it has an HUD. The two-spoke, or one-spoke really, steering wheels looks like it came from the set of Star Wars. There is LED decoration on the dashboard and in the roof. The pedals, a detail many car makers forget, look properly sporty.

The wheel is almost round, but not completely. The sides and bottom are slightly flattened. There are haptic touch pads on each side, with an empty space in the middle.

The party piece of the interior is the screen. Instead of boring icons that are positioned along horizontal and vertical axes, the Z uses a 3D cube that holds all the apps. The driver can rotate the cube with his fingers to get to the app he needs. On the top are the main indicators like speed, navigation, and range. On the bottom are a few fixed buttons for the air conditioning system.

The screen is bolted on a robotic arm, able to swirl and turn around in all directions. The system is called the HiPhi Bot. It is quite advanced. It turns itself to the person who speaks. So if the driver gives a command, the screen turns towards him. When the passenger gives a command, the screen turns to her. The screen can also move on the rhythm of music played on the car’s 23-speaker Meridan audio system.

The drive selector is a crystal piece of art with the HiPhi name etched inside.

Ever more Chinese car makers are fitting their vehicles with colored seat belts. On the HiPhi Z, the belts have the same color as the secondary color of the car, which, in this case, is purple. Note teh forward facing camera and the sensor on the B-pillar.

The Z has two captain chairs in the back, surrounded by luxuries and even more LED decorations.

There is a large Lidar in the middle above the windshield for the assisted-driving systems. The front uses an “active air intake”, not to cool anything but for aerodynamics. When the HiPhi Z reaches a speed of 80km/h, the air intake above the license plate section will automatically open to add downforce and improve the aerodynamic performance of the vehicle.

The HiPhi Z is an impressive car in looks and specifications, made by a new and daring Chinese car maker. We can’t wait what comes next.