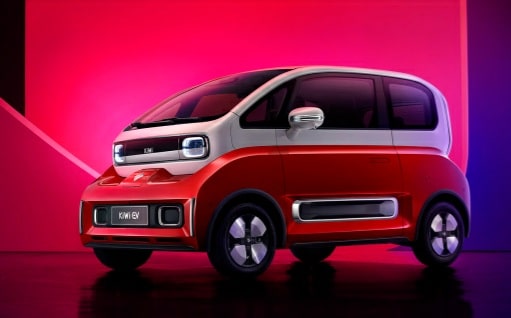 On July 13, the first mass-produced updated Baojun KiWi EV rolled off the production line. The updated Baojun KiWi EV is a mini EV under the SAIC-GM-Wuling (SGMW) joint venture and the world’s first mass-produced new energy vehicle to be equipped with drone maker DJI’s autonomous driving technology. It was officially unveiled on June 13. Pre-sales are expected to start on July 28. The full price detail is not released yet, but SAIC-GM-Wuling announced that the high-end version of the vehicle will exceed 100,000 RMB (14,800 USD).

As early as 2019, SGMW and DJI Automotive, a DJI subsidiary, launched a strategic cooperation plan. In recent years, the two parties have invested billions of funds to form a joint development team to focus on autonomous driving. The new KiWi EV is the first result of that plan.

The car logo at the front is replaced by the word ‘KiWi’, previously it was ‘BAOJUN’.

There are several cameras and sensors: one above the license plate, one attached to the mirror, two on the front fender, and another two on the rear fender. Furthermore, the updated KiWi EV is equipped with more advanced binocular cameras, likely from DJI, whereas most cars in this segment, and even above, use monocular cameras.

The interior comes with a twin 10.25-inch screen setup. The central control screen is equipped with voice interaction and navigation. A large area is covered with suede material.

The new Baojun KiWi EV is equipped with a 31.9kWh battery pack and a rear motor with a maximum power of 40kW and a peak torque of 150Nm. The maximum NEDC cruising range is 305km. In DC fast charge mode, it takes 1 hour to charge the battery from 30% to 80%.