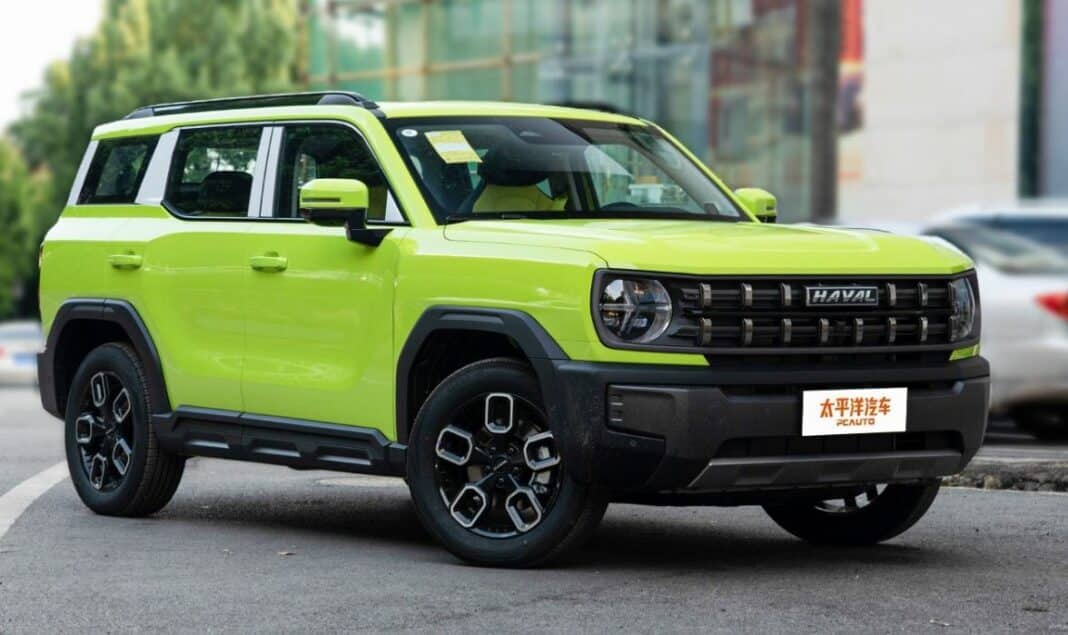 The Haval Cool Dog is available in five body colors.

It has a boxy off-road design with a straight nose, a high waistline, and short front and rear overhangs. The size of the car is 4520/1875/1745mm, with a 2710mm wheelbase. The car looks rather rugged with black cladding over the wheels and below the doors. The A-B-C pillars are painted in silver, no matter the body color.

The rear comes with a narrow D-pillar, a very narrow window, and a spare wheel cover that extends upwards into the said window.

There is also a racy brake light atop the roof.

The center console material is all solid plastic. The three-spoke steering wheel is wrapped in black leather and the seats are wrapped in yellow-black leather.

The interior comes with a 12.3-inch instrument panel and a 12.3-inch central control screen for the infotainment system equipped with a KTV function, which is increasingly popular in China. Back in the early 2000’s, many Chinese car makers fitted VCD-based KTV systems in their cars, with tiny screens on the dash and in the back. Nowadays it is all cloud-based of course. The app in the Cool Dog is called Thunderstone, an app also installed in cars made by Tesla China, Li Auto, Lynk & Co, Weltmeister, Aion, and Leap Motor.

Other functions include GPS navigation, voice recognition, and OTA update, and apps such as TikTok for entertainment.

The Cool Dog also comes with an 18-speaker JVC sound system, with fancy speakers in the headrests. This is the first time we see a JVC-branded audio system on a Chinese car. The system in the Cool Dog was jointly developed by JVC and Great Wall Motor (GWM), with an investment of 28 million RMB. In the near future, other GWM cars will get JVC audio too.